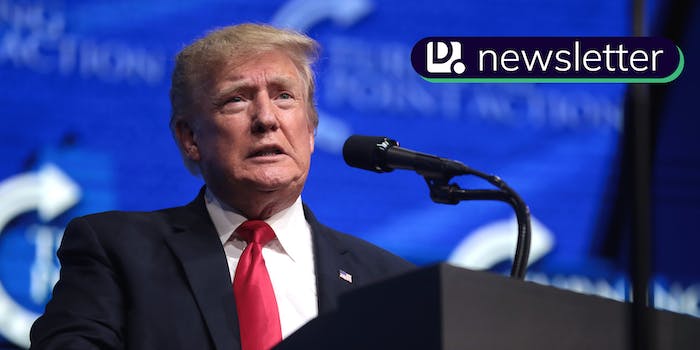 I hope you had a good weekend! To kick off the week, we’ve got our “One Dumb Conspiracy” column from our Tech Reporter Mikael.

Obviously we’ve also got a ton of the most pressing internet culture news.

DEBUNK: People online are falling for a photoshopped image that shows Rep. Marjorie Taylor Greene reading what appears to be the bible with a corpulent likeness of former President Donald Trump hanging on a cross, crucifixion-style, behind her. But it being a fake photo doesn’t make it any less creepy.

INTERNET RIGHTS: As the U.S. embarks on an ambitious effort to redo its broadband maps and paint a picture of who in the country might have woefully weak WiFi, our Contributing Reporter Karl Bode notes that by not fixing concerns and problems with the previous ways it collected data, there’s a major concern it could be a massive misuse of money.

LABOR: TikTokers are imagining what the corporate workforce will look like when millennials and GenZers finally take over. Some of the ideas? No more “corporate jargon” and PTO not being looked down upon by managers. One viral video talking about it has been viewed more than 750,000 times. You can check out our full report on the video here.

TECH: A project has been launched called The UNSEEN that tells the stories of more than 350 people who have been subjected to unfair or unequal moderation practices on social media for publishing content that doesn’t violate platform community guidelines. Our Contributing Reporter Viola Stefanello dives into the project in her full report, which you can read here.

If you didn’t hear, the Georgia Guidestones, the granite structures that have been the focus of conspiracy theories for decades, were bombed earlier this month. And now, a viral Twitter post has fooled many into believing that the act was carried out by a popular YouTuber.

The monument, which was erected in 1980, includes an inscription stating that the global population should not be allowed to surpass 500,000,000. The message is seen by conspiracy theorists as proof of a nefarious plot to kill off the majority of humanity.

The issue was thrust into the national spotlight this year after Kandiss Taylor, a Republican candidate for governor in Georgia, vowed to demolish the monument if she were elected.

So far, investigators have been unable to find the culprit and have released surveillance footage of a vehicle fleeing the scene in an attempt to solicit the public’s help.

But a satirical tweet showing a doctored news article regarding the bombing has fooled at least some users online. The article, which purports to be from the Daily Mail, claims that a “Schizophrenic man” was convicted for the bombing. The man, who is also quoted as asking for donations, is none other than cryptocurrency YouTuber Luke Smith.

Ironically, a photo next to Smith of a courthouse sketch that appears to resemble the YouTuber is in fact the former CIA software engineer Joshua Schulte who was recently convicted for leaking documents to WikiLeaks.

Despite the fact that no such article actually exists on the Daily Mail, many users celebrated the man for the bombing.

“Amazing, it took a week to catch the guy, meanwhile everyone who visited Epstein island remains free and anonymous,” one user wrote.

“I wish I could donate, but I will [sic] simply like to thank him, and shake his hand for a job well done!” another said.

But not everyone fell for the fake article. Many users also appeared to be in on the joke.

“Can’t believe Luke Smith was behind it all,” one user quipped.

The bomber or bombers, however, have still not been caught to this day.

The remaining Georgia Guidestones were later destroyed by authorities over concern regarding public safety. The monument is now permanently closed to the public.

Sustainable backpacks for those who roam

Dare to Roam is all about feeling protected. The innovative antimicrobial-treated gear and accessories help prevent the spread of bacteria and germs, so roamers of all ages can travel safely and in style. Roam between school, office, power lunches, public transportation, and home with all the things you need and and none of the microbes. The antimicrobial backpacks are now back in stock—just in time for the Back to School season!

📹 In a series of videos, a TikToker posted security camera footage of a man walking toward their daughter while playing in the yard and her mother confronting him.

🚗 A worker recounted in a viral video how she was approached by a customer during her unpaid lunch break while eating alone in her car. Many people in the comments shared similar stories.

🍞 A 21-year-old TikToker says her manager at Panera Bread spanked her because she clocked in for work without her apron on.

🎮 Microsoft is banning NFTs from Minecraft, saying the blockchain-based art “takes the focus away from playing the game and encourages profiteering.”

🥝 Faced with harsh censorship, TikTok cannamoms fight against the stigma around weed and motherhood. If you want more stories like this, subscribe to the Passionfruit newsletter.

💸 A TikToker revealed that his friend asked him to Venmo her $3 for an Uber ride despite the fact that he spent $17 on drinks during their outing.

💪 This culinary-grade powder may be the ingredient missing in your wellness journey. Here’s why Caliper may be the greatest thing since sliced bread.*

🕰️ A woman working from home shared her boss’ reaction to finding out she made a TikTok “on the clock.”