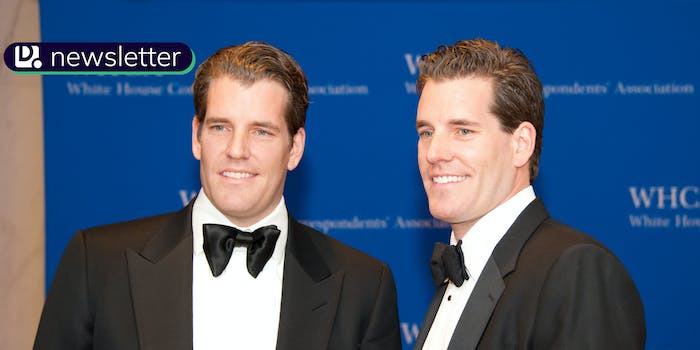 We’ve got a lot to get through today! Our top stories include the explosion of memes that followed a recent report about the Joker sequel, a video of the Winklevoss twins playing a gig sparking a ton of criticism, and a deep dive into a new Jan. 6 committee conspiracy theory floating around online.

Also, don’t forget to take our survey! It will take you just a few minutes, will help us out, and if you take it, you will be entered into a $1,000 cash giveaway. So win-win-win. (Sign up for Internet Insider to learn how to take the survey).

Anyway, let’s get to the news.

MEMES: The internet erupted into meme chaos after a report indicated that Lady Gaga was in early talks to star in the sequel to Joker, the Oscar-winning comic book movie and that the film is set to be a musical. Our Culture Reporter Michelle breaks down the torrent of memes and jokes, which obviously included “Joker Face” puns.

IRONIC: Cameron and Tyler Winklevoss were captured on video playing a gig in Asbury Park, New Jersey last week, and people online had a lot of questions about it. Especially the irony of the two billionaires, known for their lawsuit against Facebook, covering songs by Rage Against The Machine. “I’m actually losing my mind,” one person online said in response to the video.

CONSPIRACY: Conspiracy theorists are claiming that the January 6 Committee doctored footage to remove Ray Epps, a man that they have accused without evidence of inciting the Capitol riot on behalf of the federal government. Our Tech Reporter Mikael unpacks the latest conspiracy theory unfolding online in the wake of the committee’s hearings.

The summer of ‘RRR’

I watched a lot of content when I had COVID recently; despite all the talk of “mild” cases with vaccines, I was still ill for nearly two weeks. I consumed a lot of stuff, most of which was lost in the COVID haze.

Except for one movie. I kept a running list of all my symptoms and when I went back to look at it recently, on day four I listed “smell and taste gone,” “tongue feels weird,” and “RRR holy shit.”

RRR (Rise, Roar, Revolt) landed on Netflix last month, and it’s a lot of American viewers’ first experience with director S.S. Rajamouli, whose filmography stretches back 20 years. One tweet about the film coming “out of nowhere” was quickly corrected, though Twitter buzz did more to push it into the discourse than Netflix PR.

Quite a few reviews of RRR compared it to Avengers: Endgame, and a viral clip of a screening in India certainly mirrors Marvel fans’ fervor. But it is not Avengers: Endgame—RRR was made for just over $70 million, compared to an estimated $356 million—and it’s a disservice to Rajamouli to compare the two.

RRR now has a higher audience score on Rotten Tomatoes than Endgame, but in terms of story there’s no comparison. It’s a three-hour epic set in British colonial India about a moral conflict between two men: kind shepherd Bheem (N.T. Rama Rao Jr.) and unstoppable officer Raju (Ram Charan), who both possess incredible strength. The cinematography is remarkable from the start: A claustrophobic chase scene through a crowd unfolds about 10 minutes in, long before the title card even drops. (That happens around 40 minutes in, amazingly.)

There are scenes of men punching holes through punching bags, outrunning tigers, giving each other piggy-back rides. One of the most astounding scenes (in a movie full of them) isn’t even an action sequence: It’s a dance-off. And, ultimately, it’s a movie about friendship and community (in the face of racism and oppression). Marvel simply could never.

While RRR is on Netflix, where it’s been on the Top 10 movies and non-English movies list, seeing it in a theater (if you’re safely able to) is the best way to experience this masterpiece.

Rejuvenate your skin with the next wave in the clean beauty movement. One Ocean Beauty’s marine-based skincare line is clinically proven to sculpt and smooth the complexion, so you can practically wash away your wrinkles and dark spots. Shop now to get 20% off all face products on orders over $80 with code AFF20.

🥕 An Instacart shopper says a customer cancelled a 125-item order after she had already collected half of it—and the company paid her only $7 for it.

🐶 There are apparently five dog breeds that you shouldn’t adopt, according to a viral video from a former pet industry worker.

🧺 A tenant’s rant about being charged $20 for one laundry cycle in her apartment building has resonated with people online.

🤩 Get ready to fill up your shopping carts with the life-changing gadgets that genuinely wowed our editorial team.*

💼 A woman’s viral video about office culture is sparking debate online, with some people feeling that going back to the office is a “nightmare” and that “company culture is long gone.”

🍻 A TikToker says her well-intentioned first date told a bartender the two of them “were together” when ordering drinks, not knowing that she had arrived early and started a tab for herself.

🥝 Influencers who stutter prove you don’t need fluency to have a voice. Want more stories like this? Subscribe to Passionfruit, the Daily Dot’s weekly creator economy newsletter.

🚗 In a now-viral TikTok, a woman says that she “heard a huge car crash” near her house, only to discover that her DoorDash driver was the one who crashed.

🖥️ If there is one word that sums up the Trump years, it’s disinformation. With “The Trump Disinformation Project,” the Daily Dot takes you behind the scenes with nine different stories that expose how disinformation was weaponized.

Don’t be this person. One TikToker detailed how he asked a woman to give him 15 more minutes to complete her take-out order because it was in the middle of the “rush.” She said no, and waited angrily and didn’t leave a tip on a $650 order.