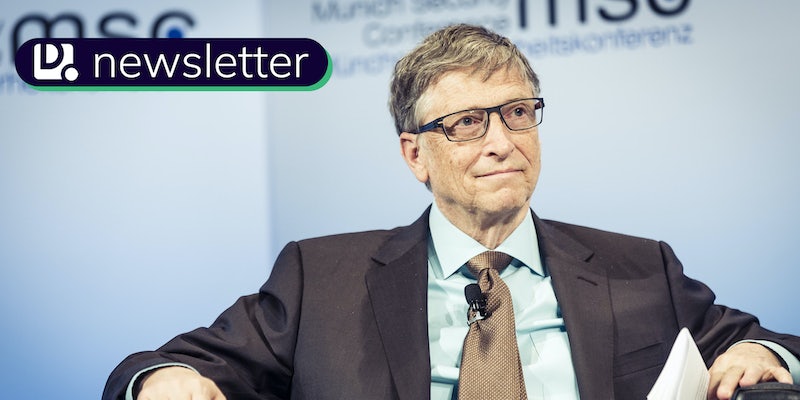 It’s Monday, so that means we are kicking off our week with our Tech Reporter Mikael’s weekly “One Dumb Conspiracy” column. This week he dives into how conspiracy theorists are convinced babies will be forced to drink formula made by Bill Gates.

In our last newsletter, you (hopefully) read Ramon’s column about the “summer of scoops” at the Daily Dot. Well, we’ve got one for you today from our Politics Reporter Claire. Check it out in today’s top stories below.

Let’s get to the news.

BIG TECH: A new European Union proposal would require tech companies to scan encrypted messages for child sexual abuse material (CSAM), similar to a proposal from Apple last year that many privacy advocates warned could be misused and “laid the foundation for censorship, surveillance, and persecution.” The EU plan is being called worse than Apple’s plan. Check out our full report here.

EXCLUSIVE: While the government downplayed its involvement with We Build the Wall, the crowdfunded project to build a section of the U.S.-Mexico border wall and donate the land to the government, the Daily Dot obtained documents from a public records request that show hundreds of pages of emails between the organizers and government agencies. Check out the exclusive report from our Politics Reporter Claire here.

MCU: With Doctor Strange in the Multiverse of Madness now out (even with some iffy reviews), it does set up future storylines for the Marvel Cinematic Universe. As Gavia, our culture reporter, writes, that means there are some specific comics you’ll want to read to stay on top of what is coming next. Check out her two comic recommendations here.

Conspiracy theorists are accusing billionaire Bill Gates (as always) of purposely creating the ongoing baby formula shortage in the U.S. as part of a sinister plot.

The shortage, which has become a national crisis, has been building for some time due to a range of factors including recalls, the COVID-19 pandemic, and regulatory and trade policy.

The multitude of issues has led to a perfect storm where 40 percent of formula is out of stock nationwide.

But in the minds of conspiracy theorists, such issues are never seen as complex and nuanced. Instead, all the world’s ills can be blamed on a single issue or person: in this case, Gates. The billionaire is at the center of a number of conspiracy theories about his farmland purchases, attempts to unleash smallpox, and even blocking out the sun.

Users across social media are now pointing to investments Gates has made into synthetic baby formula as proof of him being responsible for the shortage.

Posts on Twitter that cast the issue in a conspiratorial light have earned tens of thousands of retweets and shares.

Others pointed to news articles discussing Gates’ venture, showing that the billionaire was in fact investing in alternatives to current baby formulas.

“Bill Gates is heavily invested in lab produced breast milk? And now we have a baby formula shortage?” another asked. “Uh…ok…anyone gonna cover this story?”

Yet the story has received coverage for some time. Gates’ investment in Biomilq, a company which cultures mammary epithelial cells to produce breast milk, was first made in 2020.

Biomilq co-founder and CEO Michelle Egger stated at the time that the effort was aimed primarily at reducing carbon emissions.

While there are many variations of the conspiracy, they all generally boil down to the claim that store shelves will be flooded with Gates’ milk now that he’s successfully destroyed his competition.

Although there are countless criticisms that can be made of Gates’ influence and power, the entire conspiracy theory crumbles under even the smallest scrutiny.

Biomilq, the startup that received a $3.5 million investment from Gates, says its product won’t be available for at least the next three to five years. The synthetic formula will also need to gain regulatory approval.

But don’t expect conspiracy theorists to share that simple fact as they warn millions online that store shelves will soon be consumed by Gate’s milk.

Repair your relationship—and make it stronger than ever

If your relationship feels broken, there is hope. Couples counseling with Talkspace can help break down a couple’s barriers to communication, so they can work through their problems effectively and rebuild their relationship. Sign up today and get $100 off your first month with code SPACE.

🥡 A viral TikTok posted by a DoorDash worker roasts the “laziest customer ever” for having food delivered across the food court in a mall in Pennsylvania.

💰 The price of the meal should not be a birthday surprise. A TikToker shared the menu of a birthday celebration she was invited to by her “rich friend” and was floored by how much she was going to spend on one meal.

🤑 Yikes. A server said in a viral video that a man tipped her a hundred dollars because he found her attractive. But she knew his girlfriend.

🍳 A Starbucks barista is going viral for complaining about customers who ask for ingredients to be swapped on pre-made breakfast sandwiches.

🤣 A TikToker’s sister asked her family not to “do anything weird” when she brought her boyfriend home for the first time… and you can probably guess they didn’t listen to that request.

✨ Get your fix for all things wizardry with the best magic movies that aren’t Fantastic Beasts.*

☕ A woman online says that baristas flirt “so hard” with her boyfriend when she doesn’t go to the coffee shop with him, finding notes like “have a great day” with a heart on the side of the cup.

🥝 Artist Ilse Valfré shares her brand’s journey from Tumblr to the blockchain. Want more stories like this? Sign up for Passionfruit, the Daily Dot’s weekly creator economy newsletter.

🖥️ If there is one word that sums up the Trump years, it’s disinformation. With “The Trump Disinformation Project,” the Daily Dot takes you behind the scenes with nine different stories that expose how disinformation was weaponized.

A college student posted a viral video showing her friends’ bank account balances, sparking a discussion about how much money young people should have in their bank account. Many have thanked her for sharing the video.