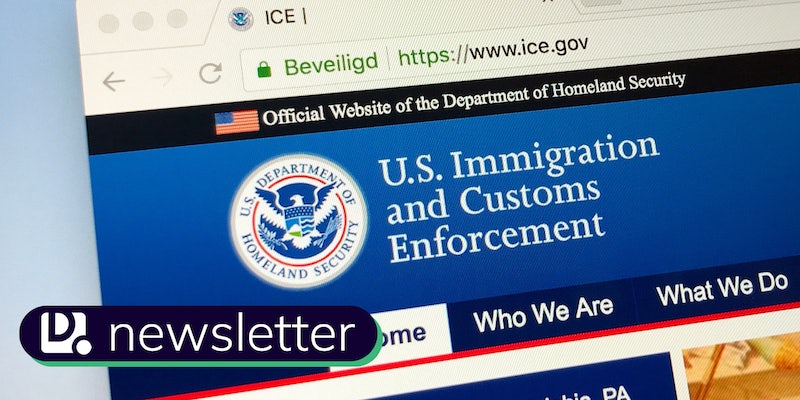 Newsletter: ICE is probably tracking you with its surveillance dragnet

Today’s top stories from across the web include key reports on privacy, surveillance, and (yes) more Elon Musk-Twitter news.

Plus, our Culture Reporter Michelle dives into HBO’s Barry in this week’s “Now Streaming” column. The show has been on my “to watch” list for a long time, and after reading her column, it has jumped up a few spots.

SURVEILLANCE: A new report has found that Immigration and Customs Enforcement (ICE) has vastly expanded its surveillance capabilities by relying on private data brokers. The agency has build a dragnet surveillance system capable of tracking essentially any adult in the U.S. in real-time. Our full report notes how researchers believe ICE sidestepped “legal and ethical lines” while building its system.

PRIVACY: A TikToker says that Amazon required her to input her driver’s licenses information to buy a First Response pregnancy test online. In a video shared with the Daily Dot, Amazon gave her a prompt that read “You must verify your age to purchase this item” and asks for a date of birth and driver’s license information for identification. Our IRL Reporter Tricia breaks it all down in her full report here.

BIG TECH: Elon Musk said that he would reverse the Twitter ban of former President Donald Trump. While Musk has hinted at this decision, it’s not clear Trump would even come back. He’s said that he wouldn’t return to Twitter if he was unbanned and use his own app Truth Social, which has been plagued with issues since launching.

The brilliance of HBO’s ‘Barry’

In this current era of So Much TV, the line between comedies and dramas is blurring even further than they already have; it’s not just about runtime anymore.

To name a couple of recent examples, AMC’s Kevin Can F**k Himself had its cake and ate it too by lumping a sitcom and a Breaking Bad-esque thriller into one show, while the critical hit Succession is a drama that often feels like a comedy.

And Barry, from Bill Hader and Alec Berg about a depressed hitman who takes up acting, is a dark comedy that often feels much more like a tense drama—and it’s one of the best shows on TV right now. (The other is Better Call Saul, another TV show that blurs genres with the added bonus of stressing me the hell out).

Its episodes are fairly short, and full of zingers and intensity.

In one moment, it’s silly as we see a group of struggling actors attempting to enact whatever concocted scenario that washed-up actor and teacher Gene Cousineau (Henry Winkler) comes up with. In the next, Barry (Hader) has to navigate his day job—even when he tries to escape it—from his handler Fuches (Stephen Root), NoHo Hank (Anthony Carrigan, always brilliant) and the rest of the Chechen mob, and the immense amount of guilt and trauma he harnesses.

I binged Barry’s first two seasons a couple of months ago and experienced the full force of a show that shouldn’t work but does on so many levels thanks to Hader and Winkler’s performances. They are both allowed the space to explore aspects of their own acting arsenals that their most famous TV shows (SNL for Hader, Happy Days for Winkler) might not have allowed them.

So far, season 3 is firing on all cylinders. The writing is sharp and concise, particularly when it comes to its skewering of Hollywood and entertainment journalism through the semi-autobiographical TV show that Sally (Sarah Goldberg), a fellow struggling actor and Barry’s girlfriend, created.

It’s as tense as ever; episode 2, “limonada,” featured shades of Barry that felt both shocking and an inevitability. Gene is pushed to his limits while NoHo Hank, often the comic relief of the series, even gets his own layers of nuance.

But it’s also an incredibly well-directed show, particularly from Hader, who directed the first two episodes; Hader would direct five of eight episodes while Berg would direct the other three (including the most recent episode).

The season 3 premiere featured a mesmerizing long take highlighting all of the intricacies of Sally’s show, and he captures every facial expression (both in front of and behind the camera) with incredible detail. But a gag in episode 2 featuring Gene, a breakup involving two other characters, and well-near 30 dogs just out of frame, is already an all-timer.

I can’t speak about how (or whether) Barry will make it out of a mess of his own making by season’s end, but Barry the show, as ever, remains undefeated.

Learn the language of computers

Kickstart your lucrative coding career with the 2022 Premium Learn To Code Certification Bundle. With 10 courses and over 120+ hours of training, you can quickly learn how to code in HTML, CSS, Javascript, SQL, Python, and more. Enroll today to save 98% on the course!

🍕 A viral TikTok shows a Domino’s employee allegedly using scraps instead of new ingredients to create a supreme pizza. One commenter summed their feelings up this way: “This is why I don’t eat out anymore.”

🎮 Working from home has led to a number of ways employers are trying to surveil their employees. But friending a worker on Xbox to catch them playing games while working is definitely a new one.

🛒 It’s dangerous to shop alone. Dot Recs is your online shopping guide to the best products and services that are worth your money.*

👜 A woman shared her experience shopping at a Goodwill in Florida with her mom and stumbling upon what looks like a bag of cocaine in a handbag.

🦇 Batman Unburied, the audio drama podcast on Spotify, has jumped to the #1 spot on Spotify, dislodging Joe Rogan from first place.

😱 Here’s yet another customer service horror story. An Instacart shopper says a “Kombucha Karen” customer lied to get a $2 refund.

🥝 Vickaboox shares how she cultivated a ‘community of little sisters‘ on TikTok. Want more stories like this? Sign up for Passionfruit, the Daily Dot’s weekly creator economy newsletter, for more coverage.

📱 In “Viral Labor,” the Daily Dot explores the way workers are fighting for their rights and using the internet to advocate for themselves.

🥤 A DoorDash driver shared the lowest order she ever received to shut down critics who say no one ever uses the app. It is… pretty shockingly low.

🚓 A Black man shared an interaction he had with police in which the officer appears to ask for his social security number.

Well, this is not something you see everyday. A woman waiting for coffee filmed a drive-thru worker and customer fist-fighting through the window. In her viral video, the TikToker says: “my best guess is she must have gotten her order wrong.”