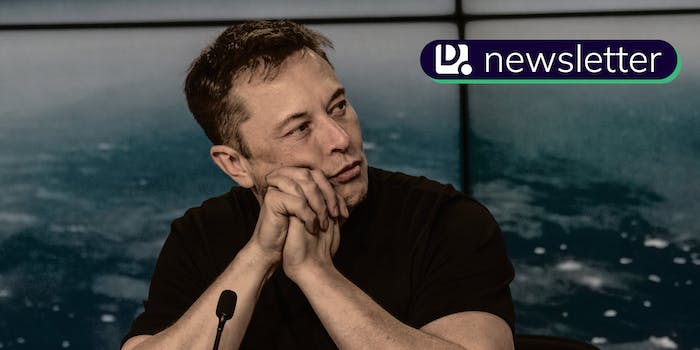 Today’s top stories include the latest on Truth Social’s botched roll out, a preview of our Senior Reporter Audra’s “That One Sound” column, and yes, Elon Musk and Twitter.

Plus, I take a look at the recent net neutrality news in my “Tech Analysis” column down below.

THAT ONE SOUND: In her weekly “That One Sound” column, our Senior Reporter Audra dives into the origin of the “Wow. Crazy. You crazy girl” sound that is all over TikTok. The sound is less than a month old, but the original TikTok has clocked more than 35 million views already. You can read more about where the viral sound came from here.

ELON MUSK/TWITTER: You probably saw that Elon Musk is buying Twitter. It was pretty hard to miss all over your feeds. Well, our Politics Reporter Claire sifted through it all to look at reactions to the news and found that many people who have had their accounts banned (including Rep. Marjorie Taylor Greene) feel like Musk will reinstate their accounts.  You can read Claire’s report here.

ISPs keep losing in its California net neutrality legal battle. Is the next stop the Supreme Court?

Trade groups representing some of the largest internet service providers (ISPs) in the country were handed yet another legal defeat last week when a U.S. Court of Appeals said it would not reconsider an earlier decision to uphold California’s “gold standard” net neutrality law.

The decision by the 9th U.S. Circuit Court of Appeals was just the latest in a long-running string of defeats ISPs have faced as they challenged California’s law.

California passed its net neutrality law shortly after the Federal Communications Commission (FCC)—then under Republican control and chaired by Ajit Pai—repealed federal net neutrality rules and the agency’s authority over the broadband industry.

Almost immediately after passing its law (which actually is more broad that the FCC’s original net neutrality rules), California was hit with a lawsuit over it.

Since then, the suit has failed to gain much traction.

The suit was put on hold as both sides waited for the Mozilla v. FCC court case, which challenged the FCC’s repeal, was decided. After that, the suit was reignited, but the Department of Justice withdrew from the lawsuit following President Joe Biden’s inauguration.

Then, a district court judge denied the trade group’s request for a preliminary injunction against the law. That denial was appealed to the 9th Circuit and oral arguments were heard last September.

Last week, the court denied that request. As Reuters notes, despite losing at nearly every turn, the ISP groups can now ask the Supreme Court to hear the case.

The Daily Dot reached out to NTCA and CTIA, two of the groups suing California, to ask about whether they would go that route. The CTIA did not return a request for comment. Meanwhile, the NTCA told me it had no comment on the decision or its future plans.

While it remains to be seen what happens in the future, it is worth noting that Supreme Court Justice Brett Kavanaugh has a long record of being against net neutrality rules.

In fact, ahead of Kavanaugh’s confirmation hearing, a group of Democrats called his views on the issue “outside the mainstream” and said that if net neutrality made its way to the Supreme Court Kavanaugh would “kill net neutrality rules forever.”

Of course, at an agency level, the FCC is expected to work to reinstate net neutrality rules once it finally has a full commission and Gigi Sohn gets a vote in the Senate… eventually.

Escape into nature for a break from the world

Self-care means stepping away from work, wifi, and your hectic daily routines once in a while. Getaway’s cozy cabins provide restorative stays in nature where you can take a break and reconnect to who and what matters most. Use exclusive coupon code DAILYDOT to save $25 on your stay with Getaway.

✈️ A video has gone viral that appears to show a Tesla vehicle driving into a jet while using one of its self-driving functions.

😲 Talk about a bad roommate. A TikToker has gone viral after saying that his “boomer roommate” stole his car and threated to call the police on him because he was parked in his own parking space.

🏨 A TikToker is telling viewers to “always latch your doors” after recounting a scary experience of a hotel room intrusion.

🖥️ Now even former President Barack Obama has weighed in on Section 230.

🤢 Yikes. A woman’s video has gone viral after she claimed that a pet sitter had sex in her cousin’s apartment while she was away on a work trip.

💰 As if renting isn’t expensive enough already, a TikToker has gone viral for sharing the massive increase to their monthly rent. Spoiler alert: It is a lot.

🍕 A Little Caesars location in Florida is under fire after a customer alleged that employees refused to help a customer after they spilled a packet of sauce.

🚗 A Lyft driver recorded an interaction she had with a woman who refused to leave her car after she insisted the driver didn’t take her to the right destination. The driver says the “Karen” put in the wrong address.

⚰️ In “Death on the Internet,” the Daily Dot explores how this digital self can live on in the internet’s memory—even after the actual self has abandoned it.

♻️ Did you know you can recycle your food scraps? Here’s a breakdown of the best food composters to transform your food waste into soil.*

📷 Can you tell if a guy has a secret girlfriend just from looking at a photo of his bedroom? According to this TikTok, the answer is yes.

Whoops! A TikToker has gone viral after accidentally opening all of the lockers at one of Amazon’s Hub Lockers. People online made jokes about the creator’s accidental discovery, with some calling it the “Amazon jackpot.”

Now Playing: 🎶“New York Mets are the BEST TEAM in MLB” by Mets’d Up Podcast🎶