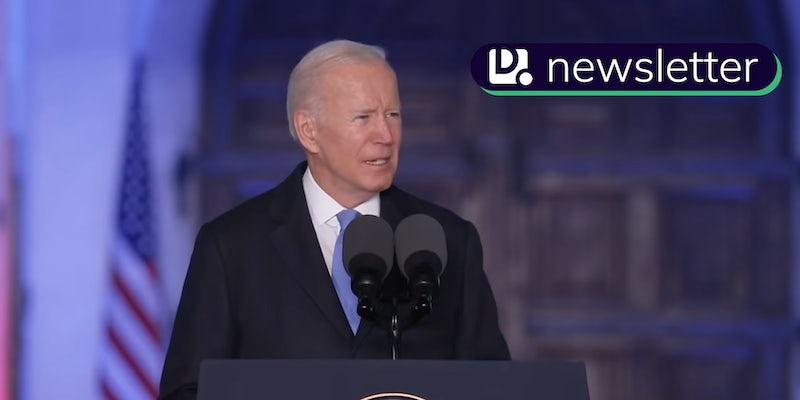 The White House/YouTube (Fair Use)

Sign up to get Internet Insider delivered to your inbox every morning.

We kick off this week with some key reports regarding labor, sounds on TikTok, and some MCU drama. Also, Mikael’s weekly “One Dumb Conspiracy” column focuses on how conspiracy theorists think President Biden didn’t actually go to Poland.

LABOR: The National Labor Review Board (NLRB) has reportedly filed a complaint against Starbucks for threatening employees and firing a union leader. The complaint says that a manager of a Starbucks in Phoenix, Arizona questioned a 19-year-old union leader about attempts to form a union. The 19-year-old has published viral videos regarding Starbucks. Read our whole report on the complaint here.

THAT ONE SOUND: In her “That One Sound” column this week, our Senior Culture Reporter Audra highlights how audio from Hailey Bieber that was meant to be serious has been drained of context and reshaped. Bieber’s plea for people to stop harassing her online has quickly become a viral sound and has been applied to “a variety of annoying—and less serious—scenarios.” Be sure to check out her full column here.

MCU: Our Culture Reporter Gavia dives into how some feathers are being ruffled in the MCU’s online fandom over the next Doctor Strange movie being rated PG-13 (just like the rest of the MCU’s movies). As she explains, many people hoped that the movie would be the cinematic universe’s “first horror movie” and have a more intense rating. Check out Gavia’s full analysis here.

President Joe Biden visited Poland late last month to address the ongoing conflict in the neighboring country of Ukraine. But conspiracy theorists believe footage of the visit proves that the diplomatic trip was actually staged and that Biden was instead on a movie set.

The nonsensical claim began after Biden met with Polish President Andrzej Duda at the country’s presidential palace. Footage of the moment shows Biden approaching the palace entrance as a line of Polish troops and government officials look on.

Yet conspiracy theorists argued that the palace entrance looked suspicious, pointing to bizarre wrinkles in many of the windows on the building. The logical conclusion, according to the internet’s conspiratorial thinking, was that the building was actually fake.

The conspiracy theory stems in part from the belief that Biden is not actually the president and therefore is living in a fake White House movie set. Biden has also been repeatedly and falsely accused of using green screens to fool the public into believing that he is actually in locations that he isn’t.

The claim regarding the fake presidential palace in Poland likewise went viral online. One video on TikTok even racked up hundreds of thousands of views before being removed. Another TikTok video shared on Facebook was also widely spread across social media.

“Somebody tell me what this is!!? Y’all waking up yet? You’re watching a movie. You trust everything that’s going on over there?” the Facebook user wrote. “Why would they have to fake a building? Where are they really? If you aren’t asking yourselves these questions, ask ‘why am I dead inside?’”

Most of the commenters appeared to agree, arguing with QAnon lingo that the building was fake and part of an elaborate ruse to fool the American public.

“I have been saying this for the longest…. ONCE YOU SEE THE LIGHT…. IT’S HARD AS HELL TO NOT SEE THE DARK….” one user said. “THE GREAT AWAKENING… STAY SAFE.”

Many applauded the TikTok videos creator for uncovering such a devious plot.

In case it wasn’t clear: the building is not fake and Biden’s visit to Poland was not staged.

In an email to the Daily Dot, the press office for the presidential palace confirmed that the building was merely undergoing renovation.

The building appears to have been covered with a long sheet, complete with an image of the building printed over it, in order to hide the scaffolding during Biden’s visit.

The practice is extremely common, especially in Europe, to cover buildings under construction in such a manner.

But conspiracy theorists had little interest in entertaining such a logical explanation.

“There’s at least a [sic] 1,000 other places to take a picture–sooo they chose a building that is under construction?—Really?” one user argued, ignoring the fact that the building was the presidential palace.

Despite efforts to ignore the reality of the situation, the building and Biden’s visit were both very real.

Create the perfect vibe at your restaurant with free entertainment

Loop is the ultimate free streaming service that offers hundreds of streaming channels with fully licensed music videos, viral clips, extreme sports, and more to keep your customers entertained. How free is it? The player is free; the content is free; even the shipping is free! Sign up now and order your free Loop player today.

🎵 An alleged Amazon employee has gone viral for claiming that her music choice, metal band System of a Down, was rejected and not allowed to be played on speakers in the warehouse.

🏢 An employment attorney-turned-business-influence has sparked some debate after she posted a video where she said “your co-workers are not your family. Your boss is not your friend, and your company is not your community or your tribe.”

💻 In “Viral Labor,” the Daily Dot explores the way workers are fighting for their rights and using the internet to advocate for themselves.

🥝 Former TikTok employees are speaking out against the company’s grueling work culture. Want more stories like this? Sign up for Passionfruit, the Daily Dot’s weekly creator economy newsletter, for more coverage.

🎲  It’s settled! We tracked down the 10 best Settlers of Catan expansion packs to build on the addicting board game.*

❓ A TikToker says she went to an apartment showing in New York only to find the current resident asleep on a mattress in the living room.

A woman has gone viral for saying that she fact checks the heights of the guys she meets on Hinge by measuring six feet and marking it next to her door.