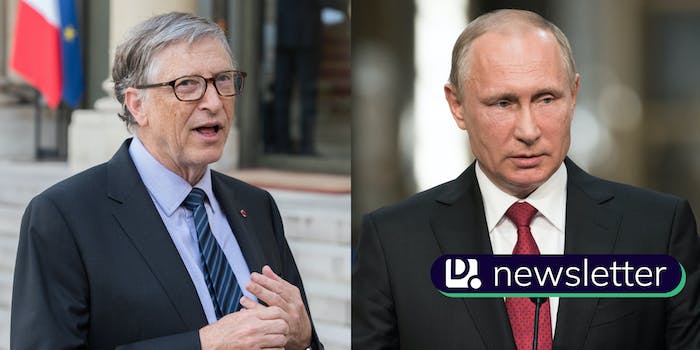 We start off the week with Mikael’s “One Dumb Conspiracy” column that looks into how a conspiracy theory has formed that includes Russia’s invasion of Ukraine, the COVID-19 pandemic, and Bill Gates. Yeah, it’s a lot.

Meanwhile, we’ve got some essential internet culture news for you.

Hacktivism: A recently leaked tranche of documents from a Russian-controlled pipeline company show how companies are struggling with the wave of hacktivism that has occurred in the wake of the country’s invasion of Ukraine. Our Tech Reporter Mikael was able to review the documents and they show the lengths companies are taking in response to the hacktivism.

Review: Our Senior Culture Reporter Audra reviewed WeCrashed, the new Apple TV+ docudrama series about the rise-and-fall of WeWork. Overall, she felt that the series was “another overlong series about a toxic startup.” You can read all of her review here.

Under Fire: A restaurant that is a favorite among influencers is facing criticism after allegations arose that it has not paid its employees on time (or at all) since it opened. A video has gone viral of a TikTok user confronting the restaurant, Mamá Por Dios, over the allegations. Check out our report here.

Multiple false claims have been combined into the ultimate conspiracy theory that involves everything from Russian President Vladimir Putin and the Ukraine war to billionaire Bill Gates and the coronavirus.

At the onset of Russia’s invasion of Ukraine, Putin attempted to justify the war by suggesting that he was “de-Nazi-fying” the country. The propaganda effort quickly failed, showing that infamous information warfare tactics weren’t bulletproof.

But America’s far-right would provide Putin with a much better story after spreading the false claim that biolabs in Ukraine were actually being used to develop biological weapons.

Despite never once mentioning biolabs in regards to Ukraine while initially justifying the invasion, Russia as well as China quickly seized on the story once it became clear that it had widespread support.

Supporters of the QAnon conspiracy theory are especially enamored, convinced that Russia is not only bombing biolabs but secret facilities where the adrenaline of babies is being harvested for consumption by the global elite.

In reality, the labs in Ukraine are from the Soviet-era. The U.S. entered into an agreement with Ukraine in 2005 to help the country stem the threat of bio-terrorism by instituting safeguards on any deadly pathogens that remained. The US would also help Ukraine with funding in order to upgrade the safety of the labs.

That hasn’t stopped Russia from claiming without evidence that the U.S. is now experimenting with “bat coronavirus” in order to to create biological weapons in Ukraine.

By combining several topics that the far-right has viewed conspiratorially, such as the pandemic and the war in Ukraine, Putin has been able to finally secure a successful lie to cover up the true purpose of invasion.

But the conspiracy theory wouldn’t be complete without mentioning Bill Gates, whose long term focus on the dangers of pandemics has made him a target for outlandish claims. Gates has spent years warning about the possibility of a global outbreak. Each warning is seen as evidence that Gates is secretly signaling his plan to depopulate the planet with bioweapons.

Just last November conspiracy theorists were convinced that Gates was preparing to unleash smallpox on Christmas after the billionaire urged world leaders to take the threat of weaponized viruses seriously. Unsurprisingly, no such event ever came to pass.

Despite every prediction about an end-of-the-world scenario, Gates’ numerous warnings are continually cited online as proof that a disaster is just around the corner.

References to Gates are now being mentioned across social media, where users are adding their own theories to Russia’s disinformation.

“Ukraine biolabs everyone are [sic] talking about ‘actually’ have dangerous diseases or biological weapons that could cause the ‘pandemic 2’ bill gates [has] been on about,” one user said on Twitter. “It’s all planned.”

Thankfully, Russia’s best efforts to obscure its responsibility for the death and destruction in Ukraine only seem to work on conspiracy theorists. Much of the rest of the world is aware of what is actually taking place in Ukraine.

As is nearly always the case, the ultimate failure of the conspiracy theory to come true will make little difference. Conspiracy theorists will either update their false claims or move the goal posts in an effort to keep their distorted reality alive.

The best games on Switch you don’t know about

Indie games are known for being more adventurous than major studio releases and, as a result, you get a more adventurous, daring, and often a weirder gaming experience. If you’re new to indie games or a little overwhelmed by all the games available, we’ve got you covered.

We’ve picked out some of the best indie games on Switch for gamers of all types, and we can guarantee that at least one of these games is going to get your attention. Here are the biggest new games to hit the indie scene.

A woman on TikTok suggested that it may be more cost-efficient to eat Taco Bell every day rather than buy groceries, which sparked a debate among viewers.

Sen. Josh Hawley announced in a Twitter thread that he discovered an “alarming pattern” in the rulings of Supreme Court nominee Judge Ketanji Brown Jackson’s “treatment of sex offenders.” Now QAnon is erupting.

Here’s what you’ve been missing.*

From its rise out of the swamps of 4chan to the movement’s assault on the U.S. Capitol, you might think the entire story of the QAnon conspiracy theory has been told. But it hasn’t. To mark the fourth anniversary of the first QAnon drop on 4chan, the Daily Dot tells stories about Q that haven’t been looked at.

A video has gone viral where a tenant says her property manager wanted to use her apartment for marketing photos for the building. Her payment for that? An Amazon gift card.

“Back in the Day” by Erykah Badu