Here's where we stand.

With a March 5 deadline approaching and another potential government shutdown looming, Congress is working to break through a deadlock on Deferred Action for Childhood Arrivals (DACA). Here’s everything you need to know about DACA and the effort to give “Dreamers” permanent legal status and end this fight for good. Deferred Action for Childhood Arrivals is an Obama-era executive order that established protections for immigrants who were brought to America by their parents when they were under 16. Beneficiaries of the program are allowed to apply for permits to stay in the country and, if granted, are protected from deportation for two-year intervals. Applicants are strictly vetted and must meet a set of requirements, such as having a high school degree.

DACA recipients are frequently referred to as “Dreamers,” in reference to the DREAM Act, a long-sought-after immigration reform bill.

In September 2017, President Donald Trump announced he was ending DACA, saying he wished for Congress to address the status of the roughly 800,000 people protected by the Obama-era order. With Trump’s announcement, DACA would no longer accept applications after March 5.

In January 2017, however, a U.S. District Court ruled that Trump must continue to accept DACA renewals as while other lawsuits around the decision play out.

The Trump administration appeal to the Supreme Court failed on Feb. 26, staying the program for the time being, until a lower court can rule on it. Four separate immigration bills all failed in the Senate in February

Attorney General Jeff Sessions has called DACA “unconstitutional,” but the matter is far from settled from a legal perspective. The Supreme Court ruled 4-4 in a case about the DACA in June 2016, and while an appeal to the United States Court of Appeals for the Fifth Circuit blocked DAPA and DACA expansion in late 2015, it did not do so on constitutional grounds. Legal scholars have argued that the president has the legal authority to allow certain groups of immigrants into the U.S. on a temporary basis, and a group of legal experts issued an open letter supporting DACA in 2017. (You can read more on whether DACA is unconstitutional here.) 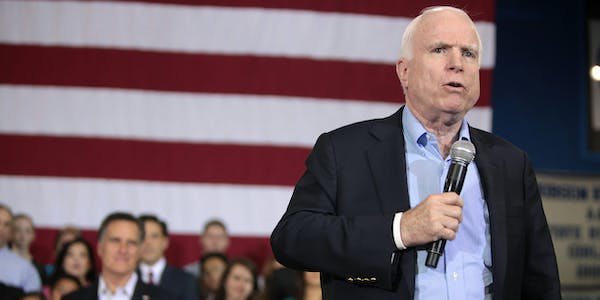 On Feb. 5, Sen. John McCain (R-Ariz.) unveiled a bipartisan immigration compromise on with Sen. Chris Coons (D-Del.) Their deal promises increased security and upgrades along the U.S.-Mexico border but does not grant Trump the $25-30 billion he is seeking for construction of his border wall. In comparison to Trump’s plan, it’s more aggressive in offering protection for people in the United States, granting legal status to people who have been here since 2013—a group larger than the 1.8 million people Trump is offering to fight for, a proposal outlined in his State of the Union.

“Our legislation, which already has broad support in the House of Representatives, would address the most urgent priorities of protecting Dreamers, strengthening border security, alleviating the backlog in immigration courts, and addressing the root causes of illegal immigration,” said Senator McCain when introducing the bill.

The legislation is a companion to a bill introduced in the House that already has the support of 54 representatives, 27 Republicans and 27 Democrats. The Uniting and Securing America (USA) Act was introduced by Rep. Will Hurd (R-Texas) and Pete Aguilar (D-Calif.).

“With the March deadline quickly approaching, it is more critical than ever that Congress come together to provide a legal path forward for Dreamers. The USA Act is a reasonable, bipartisan solution to ensure these young people may remain in the only home they know, the United States,” said Rep. David G. Valadao (R-Calif).

On Feb. 15, the so-called Common Sense Coalition reached an agreement that addressed DACA and immigration, including funding for a border security.

The president responded by moving the goalposts again.

What happens next for DACA?

The fight over DACA and government funding have been some of the most contentious since President Trump took office, and with both deadlines rapidly approaching, any proposed deal for DACA is likely to draw support but also bring about vocal criticism.

A vote on the McCain-Coons compromise failed in the Senate on Feb. 15. A vote for a hardline bill Trump supported also failed.

On Feb. 26, the Supreme Court refused to hear a Trump administration appeal on an injunction keeping preserving DACA. It is now unclear what will happen on March 5.