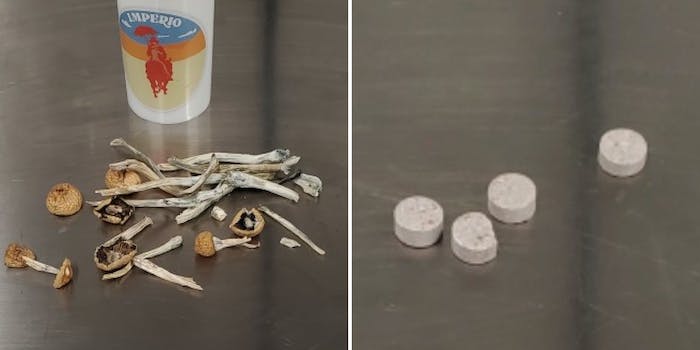 ‘The shrooms will get attention’: Border Protection thought the internet would appreciate its tiny drug bust—instead they got owned

Be careful what you wish for.

Earlier this June, authorities arrested two people at the U.S.-Canadian border Port of Champlain, where they seized narcotics. The drug ‘bust’ included ecstasy and psilocybin mushrooms.

But photos posted on Twitter by the U.S. Customs and Border Protection (CBP) backfired, as users relentlessly mocked the agency.

That’s because all that was stopped from crossing the border, sprawled out on a large metal table, was a total of four pills and a tiny handful of mushrooms, just enough to fill a standard prescription medicine bottle.

One Twitter user said: “Thank you brave heroes for protecting us from someone’s fun weekend. Other users questioned whether the tweet was a “parody.”

The decision to post the photos online was not, in fact, a joke. Documents obtained by the Daily Dot via FOIA request sent to the CBP show that the agency was hoping to gain some attention and exposure by posting about it to Twitter.

“The shrooms will get local attention alone,” one person wrote, “plus the X.”

Instead, it became a national joke.

Back-and-forth email correspondences within the public affairs department of the CBP reveal that the agency was hopeful for photos of the bust in order to do some PR.

Eager to showcase it, one person said they needed to be kept “posted on imagery.

“Let’s hope they took some,” they said. The names of the CBP employees in the emails were redacted by the government.

Apparently, though, the meager amount of drugs showcased wasn’t enough to deter the agency from sharing it on Twitter.

Twitter responded, though just not the way the agency may have preferred.

Other photos from the seizure include another small container of marijuana and a psilocybin-infused chocolate bar.

CBP also seized the vehicle used to cross the border. The two arrested were turned over to the New York State Police Department and charged with criminal possession of a controlled substance.

While the post was met with a lot of criticism, one person did react with words of encouragement. Namely, the director of field operations for CBP Buffalo, Rose Brophy.

“Excellent job by our CBP officer interdicting a unique variety of narcotics,” Brophy tweeted in response to the original post.

Brophy did not respond to a request for comment from the Daily Dot.