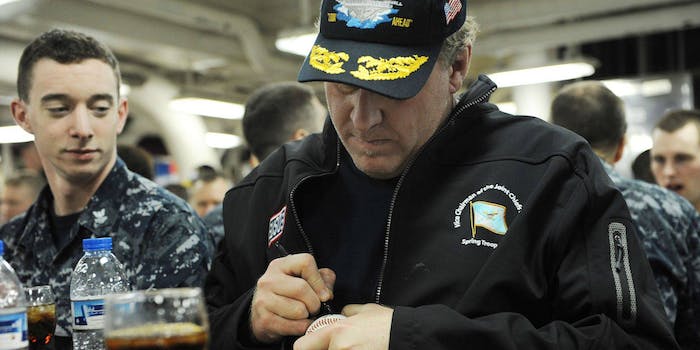 Schilling is at it again.

Schilling shared a Facebook post on Thursday which has since been taken down, linking the larger Muslim community to 9/11. The post in question defends why Republican presidential candidate Ben Carson faces criticism when all he is doing is questioning the humanity of the greater Muslim population.

Just last month, Schilling put out a tweet comparing Muslims to Nazis. It was an extreme parallel to draw, and one that ESPN thought was inappropriate enough to warrant a suspension. As of now, Schilling is scheduled to return to ESPN Sunday as a postseason analyst. Schilling apologized to a fan for the remark and said that he had put the incident behind him and was wanting to move forward.

@DrKnafa apologies, dumb ass decision on my part, can't change it, apologize and move on

But Schilling continues to fling inflammatory rhetoric at an increasingly marginalized group in American society, despite working for a global sports giant like ESPN. In fact many of Schilling’s posts are shares of highly politicized factoids, in large impact font, with noisy and compressed images.