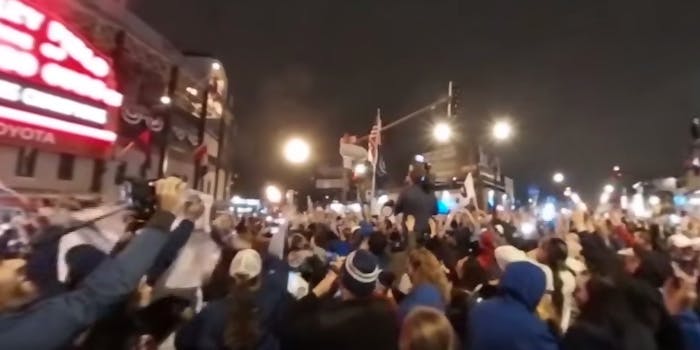 After 108 years, the Chicago Cubs are once again World Series champions, and while the final game of the series took place in Ohio, Cubs fans wasted no time celebrating the team’s win outside of Wrigley Field back in Chicago. Now you can pretend you were there, too, with this fantastic 360-degree video that was shot from inside the massive crowd of revelers.

The over four-minute video captures the moment the Cubs closed out their victory and the countless smiling faces and happy shouts that followed. Oh, and there’s also a whole bunch of police and horses keeping an eye on things.

You can watch the video on your desktop or phone, and drag your cursor (or finger) across the screen to pan around and see all the sights, but it’s actually best experienced with a VR headset. If you happen to have one available, you can load it up and actually look around for yourself, pretending that you’re actually there.

You can even play a little game with yourself and try to count the number of people you spot taking selfies in the crowd. Hint: It’s a lot.