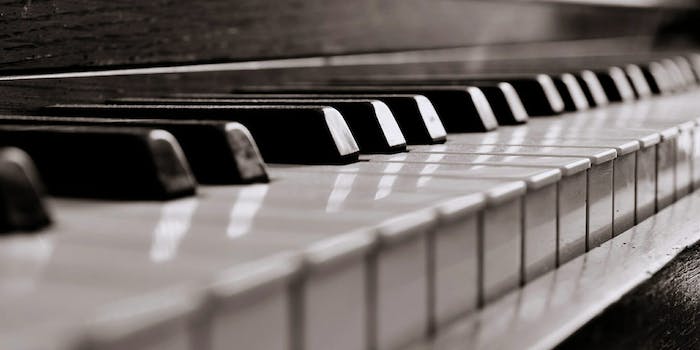 More than 3,000 people are collaboratively writing a song together

Note by note, a beautiful melody is created.

Can an anonymous group of strangers create the perfect song?

That’s what CrowdSound is trying to find out. The project, created by programmer Brendon Ferris, features a melody compiled entirely from notes voted on by strangers.

Over 3,000 people have cast their votes to help make the song, a sprawling, crowdsourced melody of piano chords. Each new note will be chosen after 50 votes are cast, and whichever note (or rest) of eight different options receives the most votes will be added to the melody. In order to cast your vote, you have to listen to the song all the way through and decide which note you think sounds best in the progression.

The song is a test of the idea that collective wisdom is smarter than individual opinion—or in this case, that a group of people come up with a song that sounds better than one created by any of the individuals within the group. In addition to figuring out whether a group of people could produce music an entire crowd enjoys, Ferris told me he was inspired by the way the voting system works on Reddit, and the collaboration of sites like Wikipedia and Stackoverflow.

“Music is very mathematical and can be broken apart into small pieces,” Ferris, a 38-year-old self-described digital nomad currently based in the Dominican Republic, said in an email. “If the majority believes a certain note sounds best after a combination of previous notes, the majority should also believe that all such crowd-picked notes sound pleasant together.”

CrowdSound is using HTML5 Piano, a Web app that simulates the full 88 keys on a piano.

Ferris, who plays guitar, hasn’t had much success writing songs on his own. His mother taught piano, and he listened to repeated scales day-in and day-out growing up, so Ferris has a built-in love for music. Now he’s relying on the Internet crowds to write his next song.

The melody itself is just the first experiment—once the song is finished, CrowdSound is also going to crowdsource the lyrics. Just like with the notes, participants will be invited to vote on words from a set of pre-chosen words. The lyrical pieces will be ordered by most up-voted with an option for words to be spread across a number of notes. Ferris said he will prevent profanity or comedic phrases with a downvote button. “The lyrics could be really what sets the song on fire,” he said. 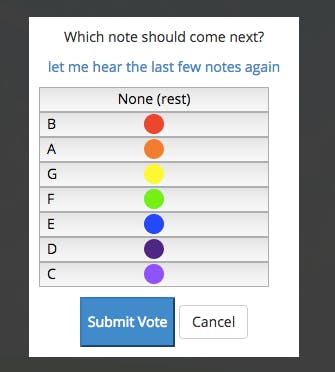 The chord structure of CrowdSound’s song is C, G, Am, F, repeated 18 times, the site explains. CrowdSound isn’t based off sheet music, and the notes are all color-coded, so it’s possible for someone to participate in the experiment without any prior musical background. But once the song is completed, Ferris is going to release the sheet music so people can record their renditions, and launch a separate “showcase” page on the site to show off participants’ performances.

So far, Ferris is impressed with what people have decided to vote on.

“Rests are very much needed here and there to produce a good melody but selecting ‘No Note’ is quite a boring choice for the crowd,” he said. “However, I was surprised to see a decent amount of rests forming part of the song. There are a few repeated notes and variation so the melody is really starting to sound like it has flair.”

Already fans are writing “manifestos,” to turn Ferris’ creation into a new art form for a variety of different styles of music.

Ferris isn’t stopping with just one song, nor will he continue song-by-song. He’s planning on turning CrowdSound into an entire platform, where people can use various collaborative tools to create music.

For now, it’s still just an experiment. Ferris said that while crowdsourced ideas could be the future of songwriting, his current ambitions for this particular melody remain small.

“I hope it is something that people will enjoy playing [and] singing, knowing that they helped write a song that everyone likes.”

Photo via Once Captured/Flickr (CC BY 2.0)