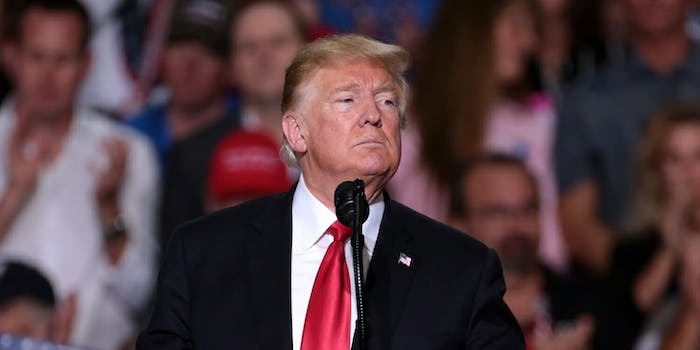 On MSNBC’s AM JOY on Sunday morning, Jonathan Capehart led a panel on how Trump’s time in office would end.

Panelists E.J. Dionne, Michelle Bernard, and Jennifer Rubin were on hand to discuss the topic. It began by discussing Sen. Angus King’s (I-Maine) assertion that impeachment and removal would let the American people off the hook—that the best way to deal with the mistake of electing President Donald Trump is to vote him out of office.

“There’s gonna be a lot of evidence of impeachable offenses in a variety of contexts,” Rubin said. But “it would be politically unwise, you wouldn’t be able to remove him, and it would infuriate a good chunk of the American people.”

Capehart then brought up the idea of presidential pardons in the context of Paul Manafort, but the conversation turned to whether Donald Trump would seek a pardon for himself, discussing Rep. Adam Schiff’s appearance on Meet the Press in which Schiff discussed the idea that the president could be indicted once he leaves office.

After a bit back-and-forth about whether Trump could seek a pardon for himself, Capehart asked Rubin for her opinion.

“I would predict, here on MSNBC, that when Trump leaves office, he will resign the presidency 10 minutes before Mike Pence leaves office, allowing Pence to pardon him, if there’s not a Republican president to follow him,” Rubin said, eliciting shock from Capehart and the rest of the panel.

Coverage of the statement has positioned the prediction as wild and improbable.

But the idea that President Trump would resign is not an illogical one. He’s quite comfortable with failure; he filed for Chapter 11 bankruptcy six times. He’s been divorced twice, not that divorce is a failure, but he certainly has no problem backing out of a commitment. He has multiple failed business ventures under his belt, including magazines, steak, vodka, and a modeling agency. He has no problem abandoning businesses and relationships, so why would the presidency be an exception?

Trump’s tactic for handling failure is to turn the situation around, lie about it, or blame the media, regardless of whether or not that’s true. As observed during the 2016 campaign, failures don’t seem to stick to him, partly because of the way he handles them.

Further, if Trump thought that this course of action—him resigning the presidency to put Pence in charge for ten minutes to pardon him—would keep him out of prison, he would likely do it. He seems to have little respect for process or the rule of law and has used loopholes to benefit himself for decades.

Whether it would actually work is another conversation entirely.

Trump may be impeached, indicted, convicted, imprisoned, pardoned, or he might get off with nothing. At this point, no outcome is actually more predictable than any other.

But looking at Trump’s history, Rubin may have a point.