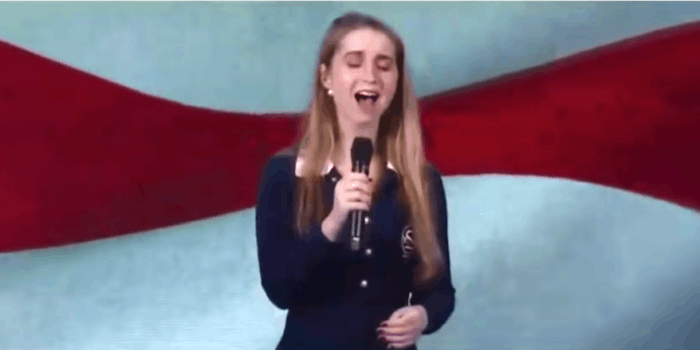 'My ears are bleeding but hey, probably the best sound bites to come out of CPAC.'

The internet is having a field day after footage of the national anthem being performed at the Conservative Political Action Conference (CPAC) made its way online this weekend.

The annual right-wing event, which first began in 1974, drew crowds to Orlando, Florida last week thanks to its list of high-profile speakers, including Sen. Ted Cruz (R-Texas) and former President Donald Trump.

Only it wasn’t a well-known politician that captured the internet’s attention, but a young woman and her rendition of the national anthem instead.

As noted by Twitter user @sleazy_slav, the performance had everything you could ever hope for, from “inexplicable key changes” to “devastatingly flat notes.”

Others were shocked by the singer as well, but argued that such a performance was fitting for CPAC.

“Overheard: The national anthem was painfully off key at CPAC, but no one there noticed because the GOP is notoriously tone deaf,” actor George Takei said.

The most impressive aspect for many was the singer’s decision to change keys multiple times throughout the song.

“Jazz students will study these key changes for decades to come,” @Elimatas1 joked.

Musicians quickly took advantage of the viral video as well by attempting to play along with the singer’s sporadic performance.

Another musician even took the time to transcribe the song’s unique version, thus allowing other music lovers to play along, too.

In case you’re wondering, one TikTok user claims to have found that the song included 9 key changes in total.

“We counted approximately nine key changes at the end of the #cpac National Anthem so we had to do this,” @ali.s94 said.

Many also questioned how exactly the singer had landed the gig, suggesting she may have either been the relative of a wealthy donor or simply plucked from the crowd.

A handful of users did, however, express sympathy for the young singer.

“I feel genuinely bad for this girl,” @D_Giffin said. “She clearly has some vocal performance skill, but she also could NOT hold a consistent tone.”

Aside from the golden statue of Trump that was made in Mexico, and Cruz’s loud scream of “FREEDOM,” the young singer is was undoubtedly the breakaway star of CPAC 2021.