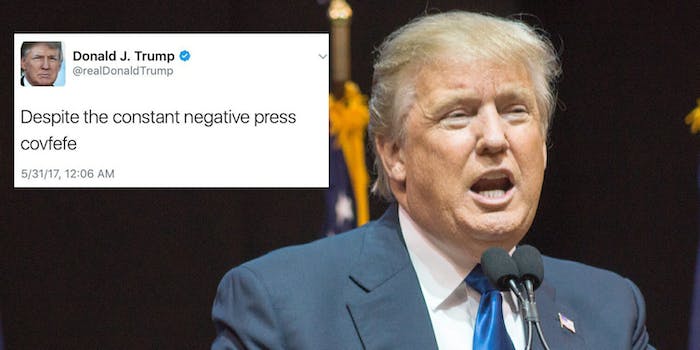 Apparently, May 31 is now Covfefe Day.

One year ago, President Donald Trump sent out a cryptic tweet that sent the internet into a full-blown frenzy: “covfefe.”

The typo–which first showed up in a tweet from the president where he appeared to be complaining about coverage in the press–sparked countless memes, jokes, and sparked an effort among Trump’s most ardent supporters online to find out what “covfefe” really meant.

There was even a bill named after the typo.

As the internet exploded in covfefe-filled madness, former White House Press Secretary Sean Spicer added fuel to the fire when he told reporters that “the president and a small group of people know exactly what he meant.”

Trump joined into the fray, goading Twitter to figure out what the word meant.

“Who can figure out the true meaning of “covfefe” ??? Enjoy!” the president wrote a year ago.

While it’s obvious that Trump made a typo–he’s made numerous ones on Twitter over the years–the mystery and aura of “covfefe” was a full-blown internet moment.

“The corrupt Mainstream Media is working overtime not to mention the infiltration of people, Spies (Informants), into my campaign! Surveillance much?” he wrote.

The corrupt Mainstream Media is working overtime not to mention the infiltration of people, Spies (Informants), into my campaign! Surveillance much?

Given the frenzy that occurred a year (perhaps a lifetime?) ago, people online decided to celebrate the anniversary on Thursday—with many people referring to it as “Covfefe Day.”

Today is a year since #covfefe. Remember when we thought things couldn't get any stranger? pic.twitter.com/mnLCHJBZYz

In case anyone forgot, today is the anniversary of #covfefe.

Now we know the real meaning of covfefe: "I'm trying to distract from all the horrible things I've done!"

#covfefe It's been a year…seems like this hell has been going on forever. When will it end Lord, when pic.twitter.com/3VDv1qcRJa

Despite the constant passage of time covfefe. Happy #CovfefeDay!

Happy #covfefe anniversary – the year that feels like a decade.#covfefeday

Maybe next year on May 31, Trump will make another typo.