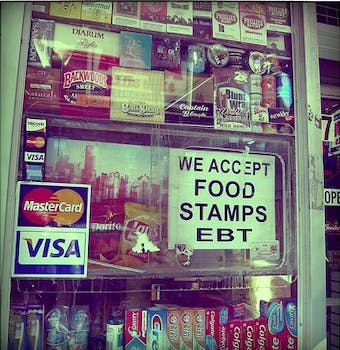 The Newark, N.J., mayor sparred with a Twitter follower over nutrition, leading to an unlikely challenge.

Cory Booker is rarely one to back down from a challenge.

The Newark, N.J., mayor mixed it up with another Twitter follower Sunday evening. Booker quoted a Greek historian, which led to another user, M Johnson, asking if he wanted to redistribute wealth. “We pay 4 HUGE back end govt programs: prisons, police, etc. If we invested in Schools, nutrition, etc we’d save $ & create wealth,” Booker wrote in response.

That’s when @MWadeNC weighed in. The following exchange ultimately led to Booker challenging the user to to live off food stamps for a week or month.

@MWadeNC, who describes herself as an Army veteran and Army wife “fighting against any and all forms of socialism/communism,” accepted Booker’s proposal. He told her to pass along her contact information to work out the details and suggested they both film the challenge.

However, @MWadeNC claimed that Booker had not provided any further information as of 10:30am ET Monday.

Curiously, none of the tweets Booker sent about the challenge appeared on his timeline as of Monday morning, save for the aforementioned Plutarch quote and one retweet, though the tweets were still viewable individually.

It remains to be seen whether the food stamp experiment will go ahead. That the tweets have disappeared from Booker’s timeline is very curious indeed.