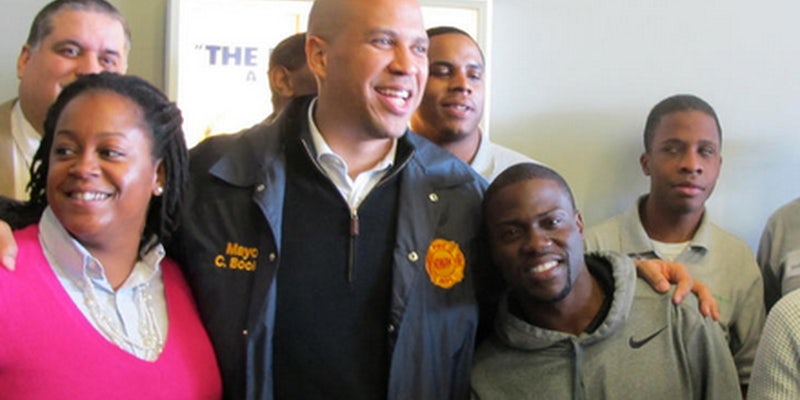 The Newark, N.J., mayor is making good on his promise to eat for a week using only SNAP—the government's Supplemental Nutrition Assistance Program.

Two weeks ago, Newark, N.J., mayor Cory Booker made a pledge to walk a proverbial mile in his struggling neighbors’ shoes, telling his Twitter followers that he’d “try to live on food stamps in New Jersey … for a week.”

The mathematical shakedown on that pledge means that Booker will have to subsist off $30 worth of feed for an entire seven-day stretch. In doing so, Booker has promised to eschew any offers for breakfast, dinner, or lunch meetings for which he wouldn’t pay, and he’s made sure to brush up on his food stamp menu offerings. He’s even given the mission a hashtag: #SNAPchallenge, with “SNAP” standing for Supplemental Nutrition Assistance Program, a government funded program that claims to “put healthy food on the table for more than 46 million people each month.”

“If you want extraordinary results you must put in extraordinary effort,” he tweeted shortly before heading to the grocery store with the equivalent of three Alexander Hamiltons in his pocket. The man was in for quite a week.

Booker’s first official tweet of the challenge included a snapshot of his Pathmark Grocery receipt, one that showed he’d purchased more than his fair share of corns and beans. The mayor of Newark only spent $29.78.

After that came a few fast facts and inspirational messages, some counters to critics and retweeted words of wisdom.

“I have lived off of food stamps for a year when I was single mom,” one follower wrote his way. “It was hard.”

That’s the truth. After one day on stamps, Booker’s already learned some hard lessons. The 43-year-old democrat, long a champion of the virtues of coffee, didn’t leave any room in the budget for a morning cup of joe.