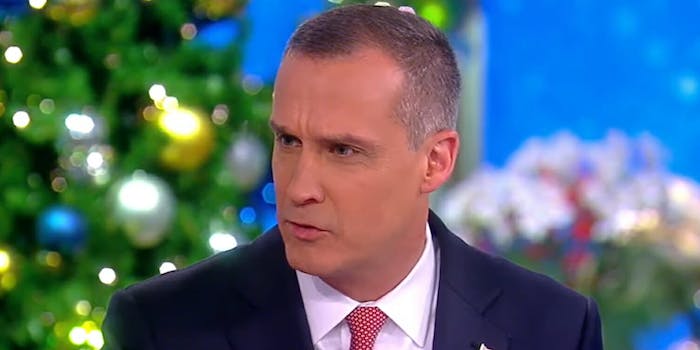 Could Corey Lewandowski be Trump’s next chief of staff?

Time is a flat circle.

President Donald Trump is considering his former campaign manager Corey Lewandowski to replace Chief of Staff John Kelly should he leave his post in the future, according to a new report.

Fox News reports that the president has talked with Lewandowski about the possibility of becoming his next chief of staff. Howard Kurtz, who reported the possible switch for Fox News, said sources told him that Trump thinks Lewandowski could be a “valuable asset” as the 2018 midterm elections come closer.

Kurtz cautioned that the former campaign manager may be “reluctant” to take a job in the White House. It would be a pay cut for him and a large portion of Trump’s staff would resign if he became chief of staff.

While rumors swirl about Trump being unhappy with yet another chief of staff, the idea of bringing in Lewandowski may have some legs.

The American Conservative, a right-wing publication published by the American Ideas Institute, recently published a story that claims Trump’s former campaign manager was the “Chief of Staff Trump Wants.”

“With Lewandowski at the helm, the administration could replicate the outlaw, lean-and-mean, and almost start-up feel of Trump’s stunning primary campaign, which Lewandowski led until he was fired in June 2016. He has continued to serve as an unofficial media surrogate for Team Trump ever since.”

Last week Vanity Fair reported that the administration may be trying to move Kelly to head the Veterans Administration.

Also, the president still seems to have a fondness for Lewandowski.

Over the weekend Trump called out his former campaign manager during a rally in Michigan, saying he “ran one campaign and he won.”