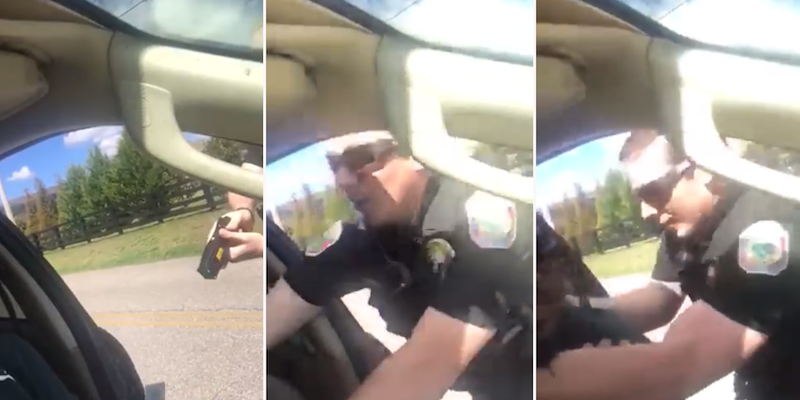 Earlier this month, 28-year-old Delane Gordon was completing deliveries as a DoorDash driver in Collegedale, Tennessee, about 20 minutes outside of Chattanooga.

Pulled over for a traffic stop, the situation escalated when Gordon, a Black man, asked to speak to a supervisor and the white police officer pulled out a stun gun.

Footage of the incident was released by Gordon’s attorney and has gone viral on Reddit with over 12,000 upvotes.

“Any exchange of that nature shouldn’t be met with immediate escalation,” Gordon’s attorney told ABC News.

In the 50-second video, Gordon is seen holding out his driver’s license.

As the officer demands he gets out of the car, Gordon asks, “What is the reason?”

He says, “I don’t feel comfortable,” and the officer continues to demand he exit the vehicle immediately.

The officer finally reaches into the car and appears to attempt to overpower Gordon, forcing him out of the vehicle with both hands.

“Why are you being like this?” Gordon says out loud.

The officer continues to pull on Gordon, grabbing at his shirt, arm, and neck. “Please don’t hurt me,” Gordon says during the altercation. He begins to ask whether the actions are lawful.

After he is unsuccessful, the officer steps back and discharges the stun gun on Gordon, who can be heard experiencing the shocks.

“That’s not lawful,” Gordon says as the video ends.

On Friday, the Hamilton County District Attorney opened an investigation into the incident, but Collegedale Police told the local ABC news affiliate there are no current plans to release the officer’s bodycam footage of the entire incident.

The Daily Dot reached out to DoorDash and Uber for comment on how to protect drivers when they get in harm’s way.