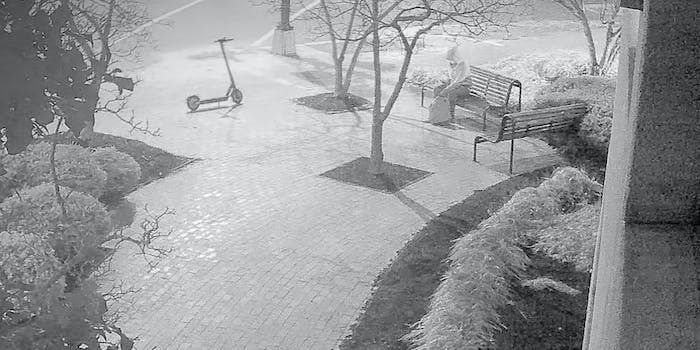 Conspiracy theorists are accusing the FBI of planting pipe bombs in Washington, D.C. after the agency released new footage of its primary suspect last week.

The suspect, who is accused of leaving two explosive devices on Capitol Hill the night before the Jan. 6 Capitol riot, has thus far eluded authorities.

In an update to the case, the FBI released new surveillance footage as well as a virtual map detailing the route taken by the suspect before pipe bombs were placed near both the Republican and Democratic national committee headquarters.

The footage at one point shows the suspect, whose face is covered by a mask, pulling out what appears to be a cellphone after briefly sitting on a bench.

The appearance of the alleged cellphone has convinced conspiracy theorists that the pipe bombs were part of an elaborate “false flag” attack.

The claim appears to have been sparked in part by a tweet from Jack Posobiec, a right-wing pundit who has shared conspiracy theories in the past. Posobiec suggested that the apparent presence of a cell phone should have guaranteed a positive ID of the suspect by the FBI.

“The pipe bomber was on a cell phone the night of and the FBI has timestamped video and still can’t ID?” Posobiec tweeted.

Posobiec’s followers immediately took Posobiec’s insinuation and ran with it.

“They can’t release the identity because it’s clearly an operative working for the FBI,” one response with nearly 600 likes said.

Cannabis in a can, the next wave of relaxation

The older you get the more you’ll want to explore cannabis outside of smoking. Not everyone wants the smell, the cough, or even just the ashy mess.

Cannabis drinks are the next wave of edibles, offering a wide range of strengths and options no matter what experience you’re looking for. From low dosage CBD to powerful THC drinks, we’ll show you what awaits.

It wasn’t long before the notoriously inaccurate blog the Gateway Pundit picked up the story as well.

Commenters on the article similarly made wild accusations despite no evidence to support any conclusion on the suspect.

“That might not even be the ‘so called’ pipe bomber,” one user wrote. “It could be an innocent bystander whom they will try to pin the whole incident on. It is the FIB!”

The allegations are part of a larger narrative from supporters of former President Donald Trump, who have attempted to shift the blame for the Jan. 6 riot by claiming that the FBI somehow orchestrated the entire event.

The far-right figure just last year claimed on Twitter that “2 crates filled with pipe bombs” had been discovered near the Korean War Memorial in D.C.

Like clockwork, that claim was picked up and spread by the Gateway Pundit as well. The allegation turned out to be entirely false.

It remains unclear whether Posobiec fabricated the claim or was given the false information by one of many alleged “sources.”

In reality, little is still known about the pipe bomb suspect or the alleged cellphone. Countless scenarios could explain why the presence of a cell phone might not be the silver bullet for identifying the suspect. For example: It could be a prepaid phone, purchased in cash, that was tossed after.

Yet conspiracy theorists thrive the most when information is scarce, allowing them to fill in the blanks to fit their world view.

In a statement to the Daily Dot, the FBI confirmed that it was aware of the alleged cell phone in the video but was unable to provide details into its ongoing investigation.

The FBI says it has “conducted more than 800 interviews, collected more than 23,000 video files, and assessed more than 300 tips related to this investigation” thus far.