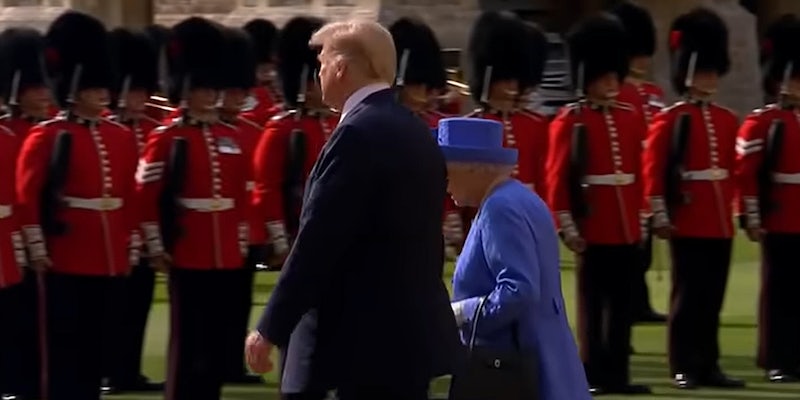 Trump is not royalty, British or otherwise.

A recent conspiracy holds that former President Donald Trump is going to be crowned king of England. The theory is of course nonsense. But some people fervently believe it.

One element of “proof” that Trump is to be coronated now that Queen Elizabeth II has passed away is based on him violating royal protocol by walking in front of her while he was president.

A TikToker broke down the bizarre theory earlier this week.

“When I first saw this video, I thought he was fucking with you. You know, the way he likes to fuck with people,” TikToker Proud Patriot said of Trump walking in front of the queen. “…Someone told me today, he’s actually been knighted as a king.”

She acknowledged not knowing the original source of the rumor, saying “it’s just what I heard.”

“There’s some speculation going on that Charles isn’t going to be king after all. So let’s say that’s true. Who is? And why would Trump be knighted as a king? Would it be king of England? I don’t know. That seems kind of crazy.”

Many of the reactions were incredulous or mocking. “America, are you okay?” wrote one.

“It really puts it into perspective that we are living in two different realities,” another commented. “Wow. Just wow.”

Others weighed in with additional “evidence” of Trump’s royal lineage. “Donald has royalty in his family and Melania is a Romanov. Baron the Little Prince books from the 1800s,” TikToker Moonlight Glori chimed in.

(This is a nod to yet another nonsensical theory that Trump was either given or allowed to handle “the Holy Sword of Arabia,” which some believe is proof he’s related to the Saudi royal family. And that Barron is a time traveler.)

Conspiracy theorists have actually believed Trump is royalty for a while. Queen Elizabeth’s death last week has reinvigorated such claims.

This theory is popular among some QAnon followers who believe a Satanic cabal that rapes and eats children controls the world and that Trump was or is fighting this cabal.

Two years ago, a QAnon conspiracy theorist known as Melissa Redpill the World made a video claiming that “Trump is in the royal line of Judah” and concluding that he will one day be king of England.

Melissa brought a United Kingdom-based QAnon influencer on her show for a rambling explanation about how Trump is the true heir to the British throne.

For an hour, she prattled on about the Stone of Destiny, read from the Bible, and finally made her way to the “gold mine” she’d supposed unearthed about Trump’s link to royal bloodlines.

“He is from both the Stewart line and from the line of the kings of Denmark…. That goes back to both lines of Judah,” she said excitedly, presenting a slide with Trump’s image in place of Elizabeth Stewart’s. Elizabeth was marred to Scottish aristocrat John Stewart, the 3rd Earl of Lennox, who died in 1526.

“It’s Biblical from so many different ways, so many promises. This is restoring the rightful heir to the throne,” Melissa said.

Trump is not now, nor will he ever be, king of England.