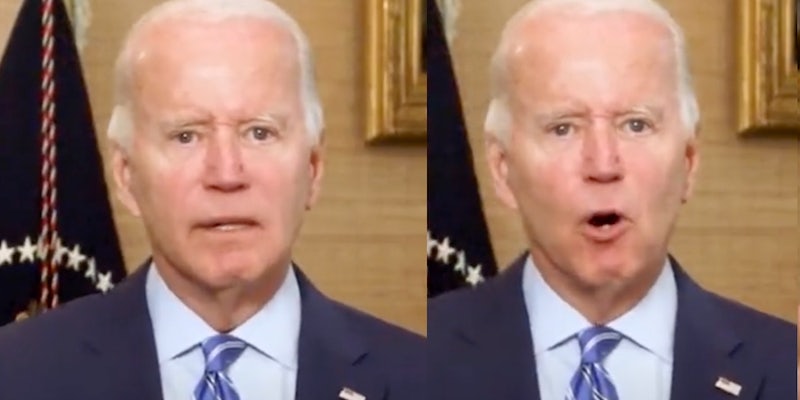 On Tuesday, President Joe Biden delivered an address criticizing people who support the Capitol riot as anti-American and anti-police.

Conservatives are in a tizzy because Biden appears not to blink throughout the video. They’re floating all kinds of theories about deep fakes, computer-generated imagery (CGI), and more.

“Donald Trump lacked the courage to act. Brave women and men in blue all across this nation should never forget that.” Biden’s referencing reports from the congressional committee investigating the Capitol riot that Trump watched the violence unfold on television for hours before he urged the mob to disperse.

Biden’s criticisms of Trump and the rioters may seem to be the most logical thing for conservatives to fixate on.

Instead, they’re preoccupied with him not blinking throughout the video.

Others opined that Biden’s on drugs like Adderall, that the video is a deepfake, and other conspiracy theories.

Many commenters just made fun of him. “Looks like a corpse on a string,” commented @ElijahSchaffer.

Another cracked, “Weekend at Biden’s?” referring to the 1989 film Weekend at Bernie’s in which the lead characters pretend a corpse is alive.

The commentators don’t seem to notice that the video is cut at the nine-second mark. There’s nothing remarkable about keeping your eyes open for nine seconds.

The Guinness Book of World Records reportedly doesn’t maintain an entry for the longest time spent without blinking. But multiple accounts place that record at somewhere north of an hour.