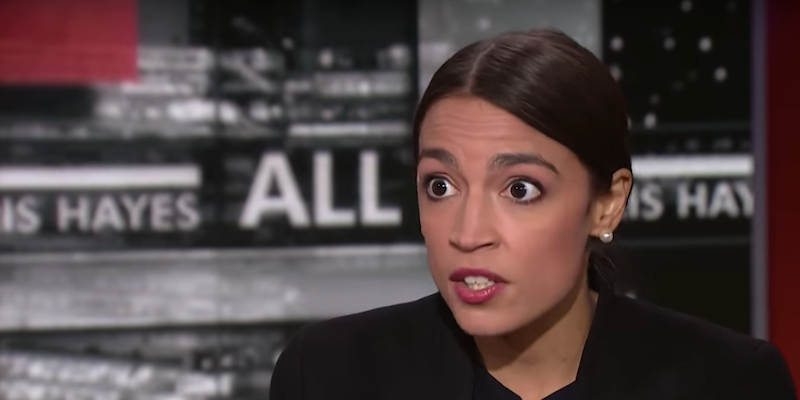 Why conservatives think Alexandria Ocasio-Cortez must be secretly rich

Who's allowed to represent the American dream?

Debates over Alexandria Ocasio-Cortez’s upbringing have been springing up since she made waves after the New York primaries in June 2018.

Ocasio-Cortez’s story has always been about money; she was working as a bartender, and beat 10-term incumbent Joe Crowley, despite having fundraised only a fraction of what Crowley did for the primary—$857,370 as of June 30, 2018, to Crowley’s $3,179,111. That includes a surge of fundraising after her win, but it’s still dwarfed by Crowley’s, which was predominantly from Wall Street banks. Ocasio-Cortez’s funds came largely from individual donors.

Ocasio-Cortez made much about the financial disparity between her and Crowley, and brought up her own working-class roots while running as a Democratic Socialist. And it’s worth remembering that most members of Congress are male, white, old, and extraordinarily wealthy.

As her star has risen, some conservatives have attempted to dismantle her working-class narrative; from tweets about her wardrobe to investigations into her savings account to photos of her childhood home, there seems to be a consistent attack on Ocasio-Cortez’s working-class bona fides.

The latest attack comes from actor, columnist, and podcaster Michael Knowles, who pointed out that the average household wealth in Yorktown Heights, the suburb in Westchester where Ocasio-Cortez grew up after spending five years in the Bronx, is $1.2 million, although he did not cite the source for that number.

Right, but @Ocasio2018 didn’t grow up in a city. She grew up in a small, homogenous, affluent suburb, where she attended excellent schools before pretending she grew up in the Bronx. https://t.co/rLaUCLp3R8

The average household wealth of the town in which you grew up is $1.2 million. https://t.co/4sLCLWfnCb

His take came in response to Ocasio-Cortez’s tweet about her new nameplate outside her Congressional office.

Ocasio-Cortez has explained before that her family moved from the Bronx to Yorktown Heights so that she could go to better public schools, and that her mother struggled to get her family into the house where she grew up.

Ocasio-Cortez responded to this latest attack on her background, saying that Knowles was mansplaining her own childhood to her.

“And in true mansplaining form, he’s doing it wrong with an [sic] great degree of confidence.”

Others on Twitter joined the pile-on, calling Ocasio-Cortez a “hyper-privileged rich girl”:

Just like Elizabeth Warren, a fraud. Because they know this is the sort of stupidity the left wants.

They came from the expensive smartphone you likely bought in your ritzy hometown. https://t.co/23rop8Uiam

This longstanding Republican concern over her upbringing and net worth speaks volumes about their values and beliefs.

Activist Ian Madrigal, the activist who attends congressional hearings as the Monopoly Man, said, “The right-wing conspiracy theory that @Ocasio2018 is secretly wealthy reveals their deep discomfort with class mobility. With all the lectures about bootstraps, conservatives don’t believe a poor person can ever be their equal. She MUST be a rich girl in disguise.”

The right-wing conspiracy theory that @Ocasio2018 is secretly wealthy reveals their deep discomfort with class mobility.

With all the lectures about bootstraps, conservatives don’t believe a poor person can ever be their equal. She MUST be a rich girl in disguise.

It boils down to a question about who’s allowed to achieve the American Dream, under what terms, and who is allowed to represent the causes they believe in.

Donald Trump, who won’t release his tax returns, grew up phenomenally wealthy, misrepresented how much family wealth he received from his father, has properties all over the world, and has only ever worked for his family’s business, is considered a credible working-class hero. He claims to champion the interests of the working class, while also working to dismantle healthcare for the working poor and lower taxes for those in his income bracket (not that we know exactly what that is).

But a woman of color who has energized Democrats and advocates for policies which she believes will help that constituency does not seem to be a credible representative of the working class in the eyes of the Republican intelligentsia. Because they’re secretly afraid they couldn’t pull off a similar success without access to the means they’re accustomed to.

Instead, she has to be secretly rich.