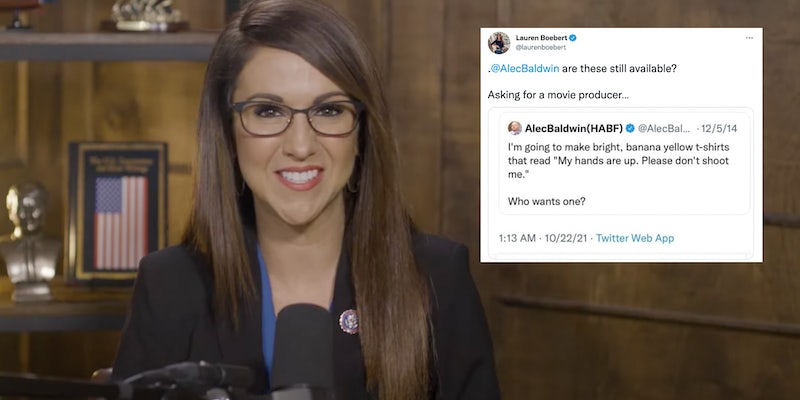 ‘What a terrible thing to post’: Congresswoman criticized for joke about old Alec Baldwin tweet amid ‘Rust’ aftermath

'You should be ashamed of yourself politicizing it.'

U.S. congresswoman Lauren Boebert joked about an old Alec Baldwin tweet regarding police shootings in the aftermath of the Rust accident, drawing criticism and derision online.

The tweet Boebert referenced is from 2014, where the actor states that he will make “banana-yellow t-shirts” that read, “My hands are up. Please don’t shoot me.”

On Oct. 21, news broke of the actor having accidentally shot and killed cinematographer Halyna Hutchins on the set of feature film Rust, of which he is an executive producer.

The Colorado congresswoman shared a screen grab of the 2014 tweet, asking Baldwin if they were still available, just a day after the shooting.

The joke drew much negative attention, with actress Rosanna Arquette criticizing the congresswoman for politicizing the tragedy.

“This was a tragic and horrible accident ms boebart and you should be ashamed of yourself politicizing it,” she wrote.

Another user wrote that weaponizing the death of Halyna Hutchins is “the epitome of cruel intentions.”

“This is Halyna Hutchins,” the Twitter user wrote. “She is a woman, daughter, wife, mother, friend, and cinematographer that is deeply missed by loved ones. She recently tweeted how excited she was to work on the set of “Rust” with Alec. Weaponizing her death is the epitome of cruel intentions.”

Another user wrote that it was the most “deeply horrible” thing they’d ever read.

“This is the most deeply horrible thing I’ve ever read,” the user wrote in response to the congresswoman. “I can’t imagine what it feels like to accidentally kill someone, but I imagine it feels a whole lot worse when people in a position of power mock and harass you right afterwards.”

Others weighed in with their contempt for the tweet.

Baldwin tweeted a statement on Friday expressing his condolences and stating he is cooperating with authorities.

The Daily Dot has reached out to Rep. Boebert’s press team regarding the tweet.