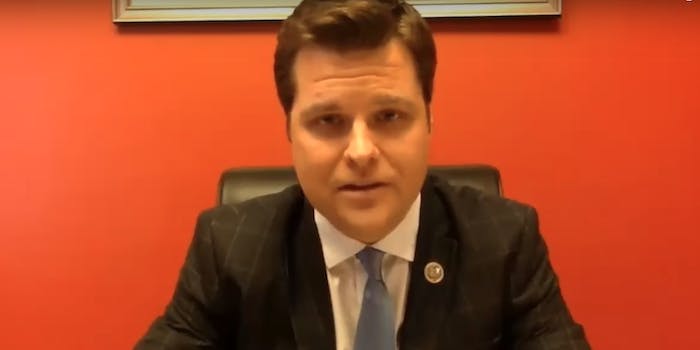 'I would not go back on Alex Jones’ show.'

“I would not go back on Alex Jones’ show,” the 36-year-old first term congressman told the hosts of Hill.TV.

“Upon further reflection,” he continued. “I think the things that Alex Jones has said and done are so hurtful to so many people that a member of Congress should not grace that platform and legitimize it.”

The Republican was on Jones’ show the same day as the resignation of former FBI deputy director Andrew McCabe to discuss the then-classified FISA memo authored by House Intelligence Committee Chairman Rep. Devin Nunes (R-Calif.). The memo, which caused a political firestorm, alleged that the FBI had improperly spied on the Trump campaign during the 2016 presidential election.

At the time of Rep. Gaetz’s appearance on the show, Jones was already notoriously associated for having spread wild conspiracy theories and fake news.

Jones regularly claims that mass shootings are staged by the government as false flag operations to justify removing citizens’ gun rights. He most controversially said that the Sandy Hook school massacre was such a hoax in which the victims and their families were mere actors.

Early in the run-up to the election, Jones voiced his support for then-GOP candidate Donald Trump—who even appeared on the show himself in December 2015.

His website InfoWars soon became a key manufacturer and propagator of partisan conspiracy theories designed to smear Democratic candidate Hillary Clinton. These included a claim that Clinton and her campaign chairman were running a child sex trafficking ring from a Washington, D.C., pizzeria and pushing rumors that her health was failing.

It’s hard to believe that Gaetz did not know what Jones was about at the time of his appearance, despite his dubious pleas of ignorance, but better late than never to see the light.