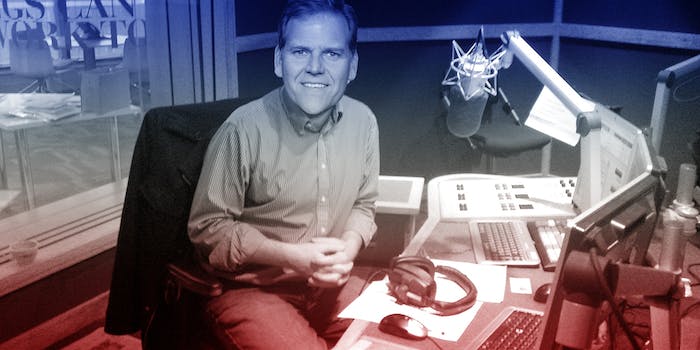 The head of the House Intelligence Committee and a bane to many online privacy activists will host a talk radio show.

Rep. Mike Rogers (R-Mich.), the head of the House Intelligence Committee and a bane to many online privacy activists, will not seek reelection this year.

An aide confirmed his retirement to the Daily Dot after Rogers announced it on Michigan radio station WJR earlier this morning.

A former FBI agent, Rogers has been in Congress since 2000, and had become the face of online privacy activists’ biggest frustrations with Congress. In both 2012 and 2013, he sponsored the infamous Cyber Intelligence Sharing and Protection Act (CISPA), which would have loosened legal restrictions on companies giving private data to the government. Activists described CISPA at the time as “a privacy nightmare.” Little ink was spilled on the fact that his wife, Kristi, was the president and CEO of an online security corporation.

Both times, it passed in the House and languished in the Senate. The second time, a frustrated Rogers infamously referred to his typical opponent as “a 14-year-old tweeter in the basement.”

But it wasn’t until former National Security Agency systems analyst Edward Snowden leaked his trove of agency documents that Rogers truly garnered the Internet’s ire. Rogers was among the first in Congress to accuse Snowden of treason (a specific charge the U.S. never leveled at him). The U.S. revoked Snowden’s passport and charged him with espionage, stranding him in Russia, so Rogers insisted he was “under the influence of Russian intelligence services today.”

Most recently, when the White House announced on Tuesday that it would end the NSA‘s practice of collecting American phone records in bulk—something it’s hard to imagine would happen without Snowden having exposed that program in the first place—Rogers jumped on board. He coauthored the so-called End Bulk Collection Act of 2014, one privacy advocates immediately said was a wolf in sheep’s clothing.

Rogers will go on to host a talk radio show with Cumulus Media. In a prepared statement his office sent to the Daily Dot, Rogers said that “The genius of our institutions is they are not dependent on the individual temporary occupants privileged to serve.”

Photo via by Darragh Doyle/Remix by Jason Reed (CC BY SA 3.0)