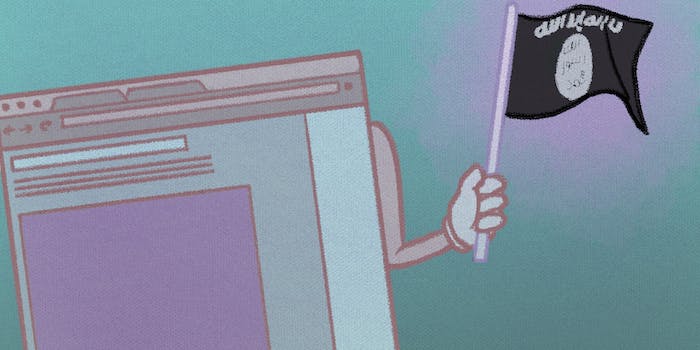 The intelligence community stands to gain a lot, but tech companies may not be thrilled.

If your social media posts make you seem like a terrorist, Internet companies might soon have to rat you out.

A Senate bill to continue funding the U.S. intelligence community requires companies like Facebook, Google, and Twitter to notify the government whenever they spot terrorist material on their platforms.

The Senate Intelligence Committee’s Fiscal Year 2016 budget bill, which funds agencies like the CIA, FBI, and NSA, contains a provision requiring “electronic communications service providers” to notify a federal authority chosen by the attorney general whenever they find terrorist content, such as bomb-making instructions.

Section 603 of the bill, “Requirement to report terrorist activities and the unlawful distribution of information relating to explosives,” reads as follows:

Whoever, while engaged in providing an electronic communication service or a remote computing service to the public through a facility or means of interstate or foreign commerce, obtains actual knowledge of any terrorist activity, including the facts or circumstances described in subsection (c) shall, as soon as reasonably possible, provide to the appropriate authorities the facts or circumstances of the alleged terrorist activities.

The companies do not have to set up operations to monitor individual users or specific conversations, but if they come across content that provides “actual knowledge” of terrorist activities, they must tell the government about that material.

There is no requirement that the companies delete the content, presumably because law-enforcement officials might want to track its spread or origin without alerting the suspect.

The notification provision comes from Sen. Dianne Feinstein (D-Calif.), the ranking Democrat on the Intelligence Committee and a staunch supporter of the surveillance state. Feinstein has long pushed to criminalize bomb-making handbooks and other materials that could aid domestic terrorists.

“Director Clapper did not request a notification requirement,” DNI spokesman Jeff Anchukaitis told the Daily Dot. “At this time we are still reviewing the bill and cannot comment on the provision in question.”

The FBI declined to comment on the notification provision, and Director James Comey would not say whether or not he supported it during a Senate Intelligence Committee hearing on Thursday.

Nate Cardozo, a staff attorney at the Electronic Frontier Foundation, warned that the provision would unduly empower tech companies with responsibilities that belong to law enforcement.

“This proposed reporting requirement is not only unnecessary, but it will impermissibly turn social media providers into an arm of the US government,” he said in an email to the Daily Dot. “Unlike the requirement that social media platforms report known and verifiable child exploitation images—something they can do based on matching hashes against a database—this new requirement would turn Twitter and Facebook into judge and jury, requiring them to judge their users’ speech and make a legal conclusion that it involves terrorist activity.”

Internet companies are not legally liable for the content that people create using their services, thanks to a 1996 law co-authored by Sen. Ron Wyden (D-Ore.), an Intelligence Committee member and fierce privacy advocate, when he was in the House of Representatives. That law is considered the fundamental legal foundation for the flourishing of Internet services like blogs, video-sharing sites, and social networks.

Wyden told the Daily Dot that he was worried about giving tech companies the power to brand users terrorists for investigative purposes.

“Social media companies should not be responsible for deciding who is a terrorist or a criminal,” Wyden said in a statement provided by his office. “No one wants to create a Facebook Bureau of Investigations.”

Wyden acknowledged that the provision “would not require companies to change their existing practices” and said he wanted to clarify the language “to ensure this legislation cannot be used as an excuse to pressure social media companies to screen their users’ posts.”

“Of course you don’t have the right to engage in unlawful conduct, but you have a sacred First Amendment right to talk about it all you want,” Rottman told the Daily Dot via email. “This measure would result in online platforms either eliminating forums for that speech altogether, which in addition to being a free speech issue could also potentially drive it underground, or could have them reporting people just for discussing sensitive topics.”

Intelligence and law-enforcement agencies have increasingly come to rely on tracking extremist propaganda as more and more jihadists join social networks to share their propaganda. The FBI and other agencies have arrested numerous people with ISIS loyalties based on their social media activity.

The Intelligence Committee’s bill must still pass the full Senate before it is included in the chamber’s overall budget.