Confide wants to be Snapchat for business

Why email secrets when you can Confide them instead?

Snapchat captured the momentary message market initially, but there have been ample spin-offs. Still, most of these “disappearing” messaging apps target teens. But what if you’re a corporate executive who needs to send a message that absolutely must not be intercepted? One option is an app called Confide, which bills itself as “your off-the-record messenger.”

In other words: Snapchat, but for business.

“Spoken words disappear after they’re heard,” Confide says on its website. But what you say online remains forever.”

Which we’ve learned, again and again, with each corporate hack. Emailing spreadsheets might be easy, but it also leaves you vulnerable to corporate espionage. Confide allows people to share data with coworkers and ensure that the data remain private.

Like Snapchat, Confide promises that “messages disappear after they’re read.” Unlike Snapchat, we have no reason—yet—to doubt them.

The key difference between Confide and its teen-centric predecessor is that this app requires recipients to swipe across the screen to reveal portions of the message.  The latest update added support for images and documents, which can be uploaded directly or attached from services like Dropbox and Google Drive. The swipe requirement obscures portions of graphs and other images until the user highlights them. 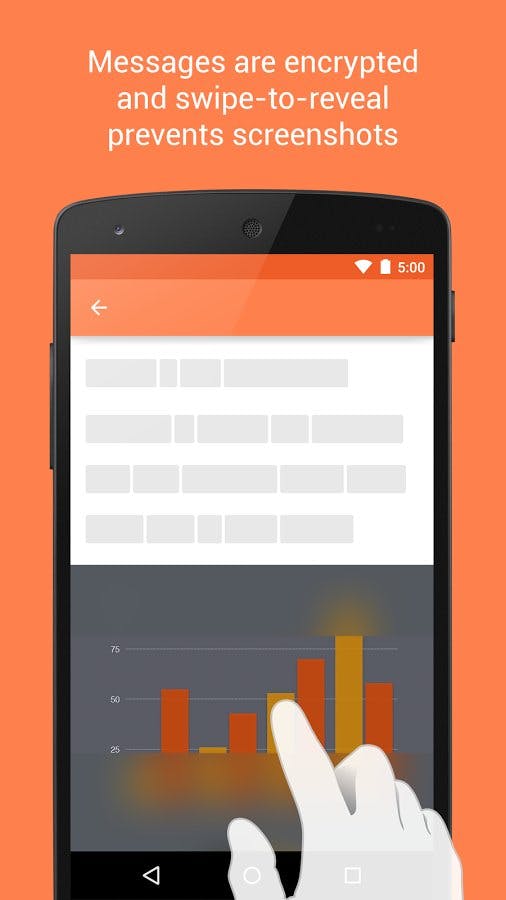 Confide’s team says that its mission is to “allow you to say digitally what you’re willing to say in person, but have been hesitant to do so.” So if you’re, say, a corporate CEO preparing a hostile takeover of a rival firm, you might want to use Confide to send your planning documents to members of your board. You wouldn’t want the competition to get wind of your plans.

Confide is available for iOS and Android.