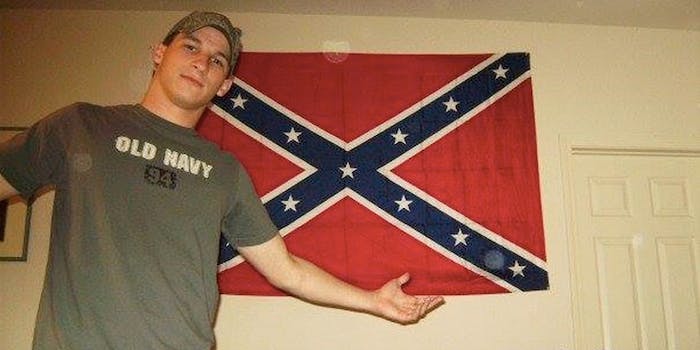 The powerful reason people are talking about this Confederate flag photo

Facebook user Josh Clark’s recent post on rethinking the Confederate Flag has received more than 115,000 likes and nearly 70,000 shares. The Tennessee native delves into how he used to abide by the “Heritage Not Hate” mentality and once said it was “a symbol of southern pride and had nothing to do with racism.”

Clark, however, explains that he had a change of heart in higher education, a time when he “began to start thinking for myself. I no longer let the people I was raised by tell me how to view every issue and tried my best to be more open-minded. I believe that one of the most important things for us to do as humans is to try putting ourselves in others’ shoes before we make any kind of judgement [sic].” 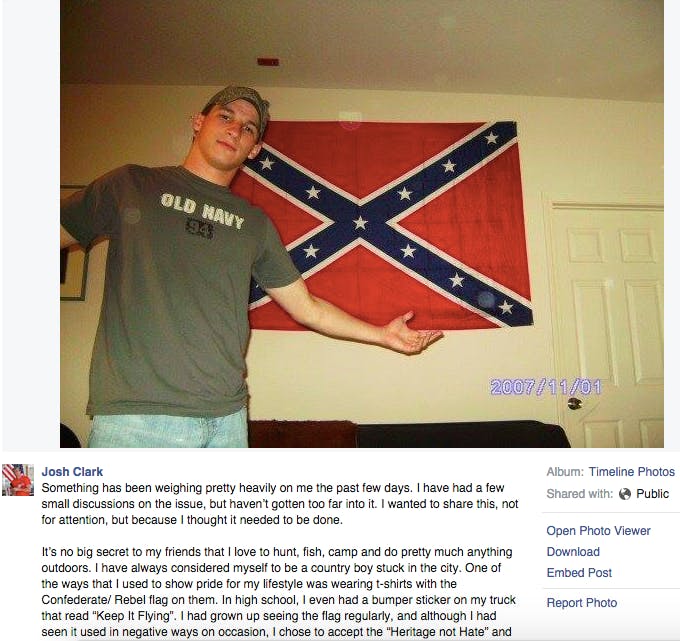 He also started to consider how some of his black friends felt about the flag and whether or not they had been too polite to ever call him out for supporting it.

“Did it not offend them?” he wrote. “Were they too nice or afraid to confront me about it? The more I researched about the history of the flag, the worse I felt. What I had been told about its history was wrong. Thousands of southerners still fly the flag with no racist intent. They still defend the good things they’ve been told about the flag. They, like I once was, are WRONG. The flag is a symbol of a way of life that was wrong. Not that it needs to be stated, but slavery is one of the most evil and cruel things this world has ever seen. The Confederate flag represents this evil. Where is the pride in that?”

Clark wraps up the post with the words, “As our country continues to move forward on equality issues, I believe the only place for the Confederate flag is in our history books.”

Last last month, the hashtag #TakeDowntheFlag started trending on social media as people urged South Carolina to remove the Confederate flag from the grounds of its state capitol in the wake of the devastating shooting that killed nine people in Charleston at the historically Black Emanuel African Methodist Episcopal Church. After a MoveOn.org petition calling for the flag’s removal got more than 500,000 signatures, South Carolina Gov. Nikki Haley (R) announced her support for removing the flag from Statehouse grounds.

On Monday, the South Carolina State Senate conducted a second reading of the bill to take down the flag and voted 37-3 to remove it. As noted by NBC News, however, this was just the second of three necessary Senate votes before the bill moves to the House.

Haley said in a statement Monday that she was happy about the Senate vote.

“The South Carolina Senate today rose to this historic occasion, with a large majority of members from both parties coming together in the spirit of unity and healing that is binding our state back together and moving us forward in the right direction,” Haley said. “I applaud the Senate’s decisive action, look forward to the Senate giving the bill third reading in the morning, and ask that the House act swiftly and follow the Senate’s lead.”