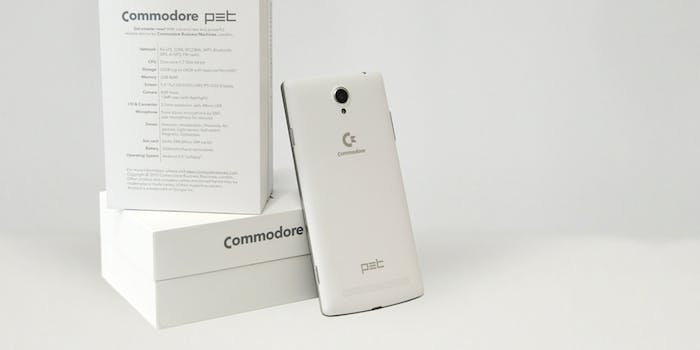 In the 1980s, Commodore was the company that brought computers into the homes of millions. The Commodore 64, an 8-bit home computer released in 1982, was recognized by the Guinness Book of World Records for the highest-selling single computer model of all time.

Then the ’80s past and the world of technology kept spinning while Commodore fell off the map. After over 20 years of dormancy after going defunct in 1994, Commodore is back, and it’s swooping into the cluttered smartphone market with a device of its own.

The Commodore PET, a name that belonged to a popular PC from the company in a previous life, is set to revitalize the Commodore brand while also preserving its history.

Cased in the sturdy aluminum frame of the device is a fair amount of power. A 1.7 GHz Mediatek 64-bit octa-core processor and 3GB of RAM provide the driving force for the device, while a 3000 mAh battery keeps it alive. Storage is available in the 32GB or 64GB variety. The device runs Android 5.0 Lollipop, which comes to life on the 5.5-inch, 1920×1080 resolution display.

There’s some additional flair to the device, as well. A 13-megapixel Sony sensor lens with f/2.0 aperture serves as the main camera, capable of capturing images up to 4096×2304 pixels and 1080p HD video. The front camera is an 8-megapixel, 80-degree wide angle lens set to serve your selfie needs.

But that’s all the stuff you’d expect out of a new smartphone hitting the market. To recapture the Commodore flame, the developers of the device have harkened back to the company’s heyday.

Along with Android 5.0, there are two emulators pre-installed on the PET: one to replicate the Commodore 64, another for the Amiga. These emulators will bring back to life the most popular games for those once ubiquitous computer systems. If you’ve had an itch for the likes of The Sentinel and Bubble Bobble, now you’ll have a device to feed your nostalgia.

This isn’t the first time the Commodore brand has been given the phoenix treatment. Five years ago saw the launch of the C64x, a reimagining of the popular Commodore 64 for the modern PC market. It never found much success, and the Commodore name was once again dead. That’s where it has remained until the Italian entrepreneurs responsible for this most recent rebirth acquired the rights to the trademark in the mobile industry.

The Commodore PET will initially launch across Europe, with the 32GB model priced at about $300 and the 64GB at $365. Available in Italy, France, Germany, and Poland as of next week, the company plans to expand launch throughout the continent and eventually across the Atlantic and into America.