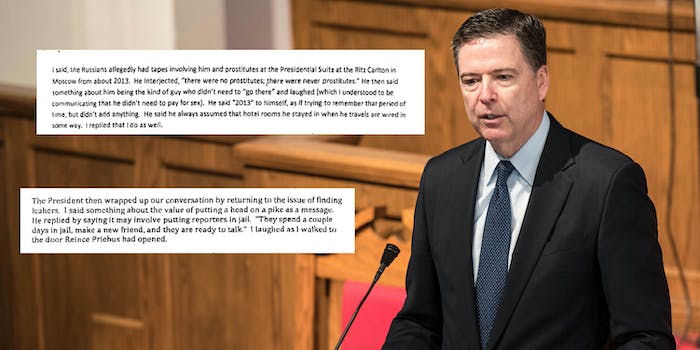 The 'pee tape' was brought up a lot.

Memos written by former FBI Director James Comey were released to the public late Thursday, and they mostly back up comments he has made about his interactions with President Donald Trump since he was abruptly fired last year.

The memos, which detail conversations with Trump from Jan 2017 through April 2017, are partially redacted and were sent to Congress on Thursday night. They detail Trump’s apparent obsession with the so-called “pee tape,” the investigation into former National Security Adviser Michael Flynn, and even the president suggesting that the FBI begin putting reporters in jail for publishing classified information.

Comey’s recent interviews touch on several of the topics outlined in great detail in the memos–however, Trump continued to attack the former FBI director shortly after their release.

“James Comey Memos just out and show clearly that there was NO COLLUSION and NO OBSTRUCTION. Also, he leaked classified information. WOW! Will the Witch Hunt continue?” Trump wrote in a series of tweets late Thursday night. “So General Michael Flynn’s life can be totally destroyed while Shadey James Comey can Leak and Lie and make lots of money from a third rate book (that should never have been written). Is that really the way life in America is supposed to work? I don’t think so!”

Here are some of the biggest moments detailed in Comey’s memos:

1) Comey talks about the pee tape to Trump

One of the first memos discusses the meeting the former FBI director had with the incoming president at Trump Tower in January 2017. During the meeting, Comey was tasked with briefing the president on the dossier compiled by Christopher Steele, which included references to the so-called “pee tape,” a video that allegedly shows Trump paying prostitutes to pee on a bed in Russia that could be used as leverage over the president.

The former FBI director recounted this exchange during his interview with ABC earlier this week.

According to Comey’s memo, Trump interjected by saying “there were no prostitutes” and said he was not the kind of guy that needed to “go there,” which the former FBI director said he took as meaning that he didn’t need to pay for sex.

During the dinner, where Comey says the president told him he needed loyalty, Trump also talked about his inauguration crowd size, the luxury of the White House, his son’s height, and the campaign. Trump also denied that he mocked a handicapped reporter and defended himself against allegations of sexual misconduct from numerous women.

Trump also asked that the “pee tape” be investigated–adding that he was upset that first lady Melania Trump may think it was true–according to the memo.

At another meeting, Comey said the president wondered out loud what it would have been like to run against Sen. Bernie Sanders (I-Vt.) instead of Hillary Clinton during the 2016 election, according to Comey’s memos.

The president apparently thought this would have happened if Comey recommenced charging Clinton as a result of the investigation into her email server.

During the same conversation, Trump showed some suspicion toward the then-FBI Deputy Director Andrew McCabe, who would become a frequent Trump target as his presidency continued.

The “golden showers thing” came up again during the same meeting where he talked about Sanders, according to Comey. Trump again told the former FBI director that the “pee tape” was not real, but he did mention something about Russian President Vladimir Putin lauding the “hookers” in his country.

“The President said ‘the hookers thing’ is nonsense but that Putin had told him ‘we have some of the most beautiful hookers in the world,'” Comey wrote.

He added that Trump did not say when Putin told him this.

Comey said Trump was particularly upset with classified information about his calls with foreign leaders being leaked even though he used a “beautiful phone” that was confidential. The then-FBI director said leaks were “terrible” and that he wanted to find a leaker to make an example of him.

Trump then pivoted saying “we need to go after the reporters.”

“They spend a couple of days in jail, make a new friend, and they are ready to talk,” Trump said, according to the memo.

Comey said he laughed and walked out of the Oval Office.

In March, Trump called Comey to tell him that he was “getting more publicity” than him and lamented that the “cloud of the Russia business” was making things difficult.

The president, according to the memo, told him that he thought Republicans would have passed an overhaul of the country’s healthcare system if not for “the cloud” of Russia. Comey wrote that, yet again, he brought up the “pee tape.”

“Can you imagine me. Hookers? I have a beautiful wife. And it has been very painful,” Trump told Comey, according to the memo.

You can read all of Comey’s memos here.