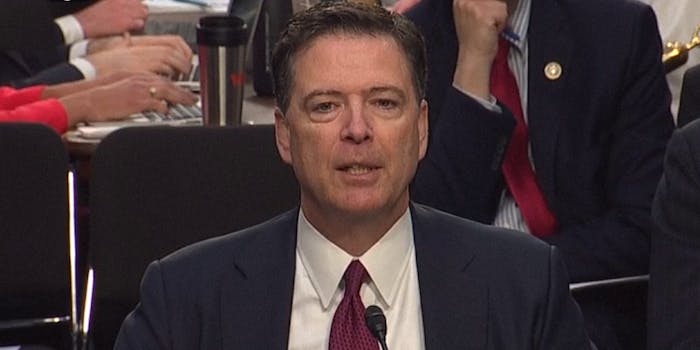 Comey wasn't coy about his reasons for doing so.

Former FBI Director James Comey said he told a friend to speak with a reporter about his memos detailing interactions with President Donald Trump with the hope that the story would lead to the appointment of a special counsel, he testified on Thursday.

Comey was asked by Sen. Susan Collins (R-Maine) during Thursday morning’s Senate Intelligence Committee hearing whether he shared the memos with anyone outside of the Department of Justice. Comey said he did and admitted that he essentially orchestrated the leak to the New York Times.

Comey said after Trump tweeted a threat about “tapes” being released of their previous conversations that he felt compelled to ask a friend to share the content of the memo with a reporter.

“The president tweeted on Friday after I got fired that I better hope there are not tapes,” Comey said, flashing the faintest of smiles. “I woke up in the middle of the night on Monday, because it did not dawn on me originally that there might be corroboration for our conversations, there might be a tape, and my judgment was, I needed to get that out into the public square.”

Comey said he did not leak the content of the memos himself “for a variety of reasons.”

“I asked him to because I thought that might prompt the appointment of a special counsel,” Comey testified.

Comey denied that the source was Benjamin Wittes, the editor-in-chief of Lawfare, but rather a “good friend” at Columbia Law School.

According to Mic reporter Kelsey Sutton and HuffPost reporter Michael Calderone, Daniel Richman, a Columbia Law professor, confirmed he was the source who shared the contents of the memos with a reporter.

As of Thursday morning, Columbia Law School’s website was down following Comey’s testimony.