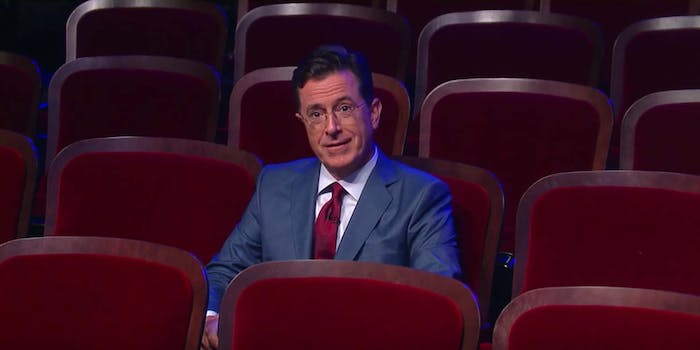 'Don't you wish you'd consulted Stephen before launching your contest?'

Just under one week from now, Stephen Colbert will make his debut as the host of CBS’s Late Show. On his Sept. 8 premiere episode, Colbert has lined up actor George Clooney and GOP presidential aspirant Jeb Bush. Colbert, who made his name skewering Republican politicians on The Colbert Report, is already locking horns with Bush in a dust up over Bush using the appearance as a fundraising opportunity.

In anticipation of Bush’s appearance on the inaugural episode of the show, the former Florida Governor launched a fundraising contest. Bush supporters could buy a $3 (or more, if one is so inclined) ticket for a raffle where the winner receives seat in audience and the chance to have dinner with Bush campaign National Finance Co-Chair, and billionaire New York Jets owner, Woody Johnson.

“If you can’t afford $3,” Colbert quipped. “You’re probably not voting for Jeb Bush.”

There was one slight problem with this plan: The Bush campaign never cleared it with Colbert, who wasn’t particularly enthused about being a campaign fundraising prop for the one-time Republican front-runner.

Naturally, Colbert responded with a video announcing his own contest.

“Two can play at this contest, sir,” Colbert said in a clip posted to YouTube on Wednesday. “So, tonight, today, or whenever you’re watching this, I am lunching my own ‘Jeb Bush on the Stephen Colbert Late Show Raffle!’ The lucky winner will also be invited to the premiere of the Late Show. Plus, they will get to submit one non-obscene question that I will ask Gov. Bush on their behalf.”

“For example,” he continued, “one question might be, ‘Don’t you wish you’d consulted Stephen before launching your contest?'”

A statement from CBS spokesperson Chris Ender made it abundantly clear the network has nothing to do with Bush’s fundraiser. “All guests on the show are provided audience tickets for their own use,” said Ender. “However, this promotion is not a coordinated tie-in between the show and the political campaign.”

Colbert being especially attuned to issues surrounding campaign finance isn’t particularly surprising. In 2012, Colbert created his own satirical super PAC—Americans for a Better Tomorrow, Tomorrow—as a way to simultaneously satirize, and teach the American public about, how the Supreme Court‘s ruling in the Citizen’s United case two years earlier had opened the floodgates for deep-pocketed donors to give unlimited amounts of money to political candidates with minimal disclosure.

The creation of Colbert’s super PAC became one of the defining moments of his tenure behind the desk at The Colbert Report. Not only because it drew a new public interest to how money flows through the American political system, but also because, in its direct interaction with the real world, the stunt set a new model for how late-night talk shows can insert themselves into national events.

This incident is also not the first time the Bush campaign has caught flack for its fundraising practices. Bush spent the better part of a year insisting he was only “testing the waters” for a presidential run before formally announcing, while doing everything a full-fledged candidate would have done in the situation. By waiting to formally declare his candidacy, Bush was able to legally coordinate with Right To Rise, a super PAC that has taken the lead on many of the day-to-day functions of his campaign.

These criticisms were cited by good government watchdog, the Campaign Legal Center, in a series of complaints filed with regulators against the Bush campaign.

.@StephenAtHome I’m in. See you September 8th my manhttps://t.co/INl40CfrQ4