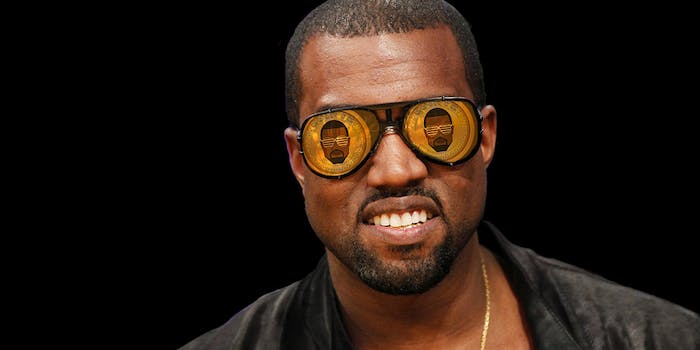 Those gold digger coders are through with the blame game.

He didn’t even let them finish.

Under pressure from Kanye West‘s legal team, the developers behind Coinye—the only cryptocurrency to use a hip-hop visionary’s likeness as its theme—have called it quits.

Their website, once a proud boast of the currency’s existence emblazoned with a cartoon of West as a fish on a gold coin, now only shows a simple JPG reading, “Pool’s Closed.” It’s a throwback to a catchphrase made popular nearly a decade ago by the notorious message board 4chan.

“COINYE IS DEAD,” the site’s only message proclaims. “You win, Kanye.”

Coinye’s creators, who remain anonymous, intended it as a widely democratic alternative to more popular online currencies like Bitcoin. It also aspired to have a musical bent; one of its founders told the Daily Dot that “we want to use the Coinye West for things music related. Hip Hop stores are emailing us and asking to be the first to accept Coinye West coins.”

But that fantasy quickly took a dark twist, as West’s lawyer Brad Rose sent a cease-and-desist letter Jan. 7, right ahead of the currency’s launch. As Coinye’s developers appeared undaunted, West’s associates filed a trademark infringement suit Tuesday, according to the New York Post.

You can’t tell nothing to whoever runs Coinye’s Reddit account, though. “What I would really like to see is a twitter bot to send coinyes,” redditor u/coinye wrote Tuesday. “If this coin goes down, the least we can do is send a massive amount to [Kanye] in hopes to change his mind.”