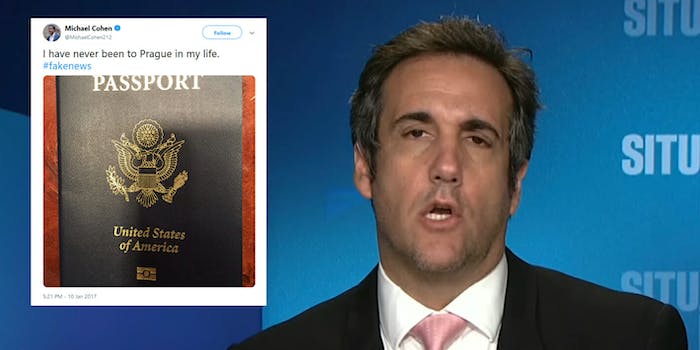 Trump's former lawyer reportedly had a cell phone ping in Prague in 2016.

Michael Cohen, President Donald Trump‘s former lawyer, had a cell phone ping off over cell towers around Prague in 2016, according to a new report, which several people online quickly pointed out contradicts the idea that he had “never” been to the city, as he said in the past.

McClatchy reports that a mobile phone traced to Cohen pinged cell towers around Prague in the summer of 2016, around the same time that the so-called Steele dossier said he met with Russian officials about the 2016 election. The news outlet says four people spoke with them about the latest information.

After the dossier was published, Cohen posted a photo of his passport on Twitter, claiming “I have never been to Prague in my life. #fakenews.”

Cohen also reiterated the claim on Sean Hannity‘s Fox News show and questioned the accuracy of McClatchy’s reporting in April.

His lawyer, Lanny Davis, also denied that Cohen had been in Prague when questioned by the news outlet.

More recently, Cohen—who is reportedly working with Special Counsel Robert Mueller’s investigation—was sentenced to three years in prison by a federal judge for charges including bank fraud and tax evasion.

The “never been to Prague” line of Cohen’s quickly was rediscovered, and mocked on Twitter, in light of McClatchy’s report.

I'm old enough to remember that felon Cohen posting a photo of his passport claiming he'd never been to Prague as if you can't simply drive there from somewhere else in Europe. https://t.co/M8WdqiuQEt

"I have never been to Prague, but I DID send my PHONE there. It had a lovely time." https://t.co/JDEplKX1ie

Cohen tweeting a picture of the cover of his passport as proof he’d never been to Prague should have been an early clue that we were not dealing with a criminal mastermind. https://t.co/LmcUO54HdH

Truly stunning how this conclusive evidence turned out to be false https://t.co/oSkNtYiT6Z

Others thought perhaps other—more salacious—parts of the Steele dossier may also be true. “Next stop, pee pee tape,” someone riffed on Twitter.

So brazen. Never been to Prague he claimed, and here's my passport to prove it.
One more tick on the dossier list of grievances.
Next stop, pee pee tape.

Doh! The Steele dossier is so on the money!! When does the pee pee tape come out? https://t.co/i47FoW1l2Y

You can read all of McClatchy’s report here.

Update 5:02pm CT, Dec. 27: Pressed on whether he would admit to having been in the Czech Republic “ever? For any reason? At any time?” Cohen responded with a one-syllable tweet: “NO.”