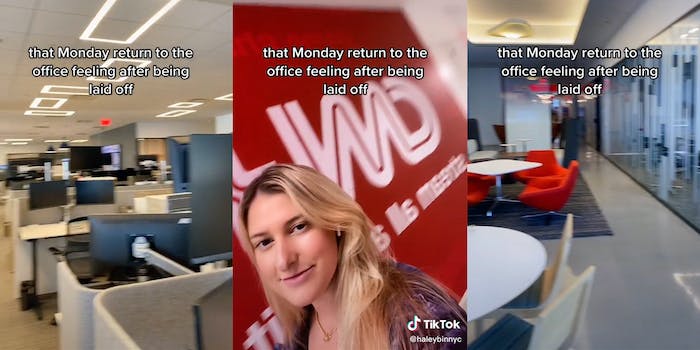 ‘Your TikTok is about to get more views than the entire network’: CNN+ employee shows up to the office despite network layoffs

CNN+, the new streaming platform by CNN and former parent company Warner Media, is saying goodbye April 30. About 350 employees will likely lose their jobs, or about half of workers involved with the project.

And this made things understandably awkward at the ol’ CNN+ headquarters this week. We know this because of a viral TikTok from laid-off employee @haleybinnc posted from the office on Monday. It’s accumulated 148,000 views.

According to @haleybinnyc, the Tennessee native moved to New York City six months ago in preparation for her new job at CNN+. Her clip shows a quiet CNN+ HQ, reportedly on Monday morning.

Her TikTok also sparked mockery of the failed streaming news project in the comments.

“Your TikTok is about to get more views than the entire network 😬,” said @maxinhoff, receiving 580 likes.

“No one wants to watch our network, what if we ask them to pay for it?” joked @kevinmsimmons88.

Replied TikTok creator @haleybinnyc: “They did lol. Our last day is tomorrow. we had to keep programming the like 3 shows that might survive.”

The abrupt folding of CNN+ was a shock to the media industry. Just last month, it hosted a big launch party in Austin, Texas, during SXSW. The streaming project onboarded talent like Chris Wallace from Fox News and Kasie Hunt from NBC. But as the merger between WarnerMedia, with Discovery, to form Warner Bros. Discovery was made official this month, plans changed.

We reached out to TikTok creator @haleybinnyc via TikTok comment.

In the comments section, she says that laid-off employees have to apply internally for other positions at CNN. In another TikTok, she asks: “Anyone hiring?”