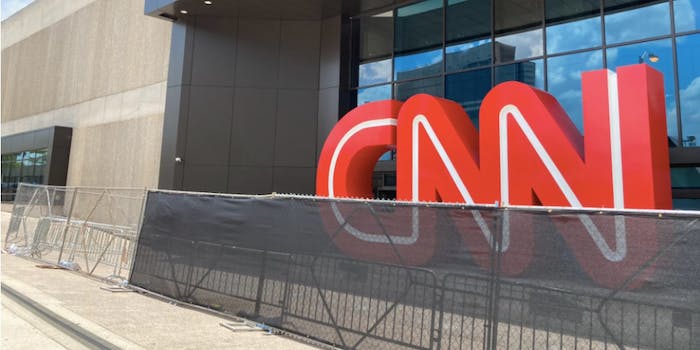 Conservatives are comparing CNN’s fence to a U.S. border wall

CNN appears to have put up a chainlink fence in between the network’s entrance logo and the roadway, following demonstrations in late May that left the front of their Atlanta headquarters vandalized.

The network seems to be attempting to limit any further property damage while they continue infrastructure repairs to the building.

In late May, people gathered at the CNN headquarters in Atlanta as part of the Black Lives Matter protests in the wake of the killing of George Floyd, an unarmed Black man.

“Protesters were seen vandalizing CNN’s logo outside its offices, breaking the building’s glass and entering the center,” CNN reported at the time.

Graffiti notes left on the property touted slogans such as “no cops” and “f*ck Trump,” according to the Hollywood Reporter.

Conservative pundits and right-wing personalities Friday evening quickly pounced on the new photo, comparing the basic chainlink fence with a 40-foot high southern border wall dividing the United States and Mexico, which has been a policy initiative of President Donald Trump’s.

They contrasted the network’s opinion hosts’ statements against the border wall to the barrier outside CNN’s building.

Chair of the Republican National Committee Ronna McDaniel and Eric Trump also weighed in on the matter and unsurprisingly took swipes at the network.

A CNN spokesperson didn’t immediately return the Daily Dot’s request for comment on the reasoning behind the new fence.