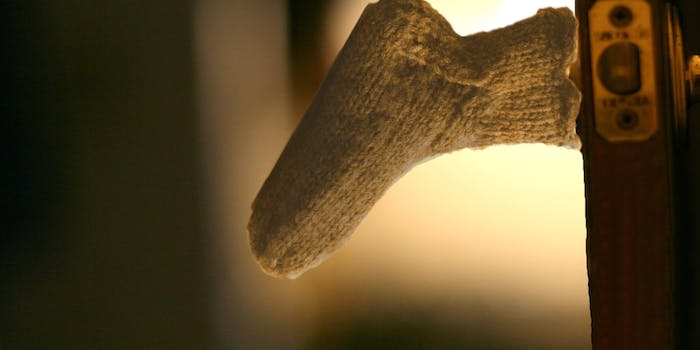 Cleaning company Clorox has a hookup app. That alone is weird, but the back story gets even weirder.

Clorox, the multinational cleaning company, was founded in 1913 as a liquid bleach factory on the east side of the San Francisco Bay. Back then, there was no online dating because there was no online. Clorox didn’t delve into the mating habits of Americans for its first 100 years in business, instead focusing on keeping them clean: The company went from a five-man startup to a $6 billion-a-year empire of spit shine.

But the company best known for bleach is also the purveyor of a number of unexpected items: Clorox owns Burt’s Bees Wax, so sorry to disappoint, but your hippie lip gloss comes from them. It keeps your water clean with Brita filters. It owns three different kitty litter companies. And Clorox also owns Sock-It, an app that helps college students who want to have sex let their roommates and the people around them know that they’re going to have sex. It’s not exactly the most obvious brand fit.

Sock-It uses a location-finding technology called iBeacon to alert everyone in the vicinity who has downloaded the app that some people are doing it, via a virtual sock. It’s a play off the concept of hanging a sock on the outside of your dorm room to tell your roommate not to come in. 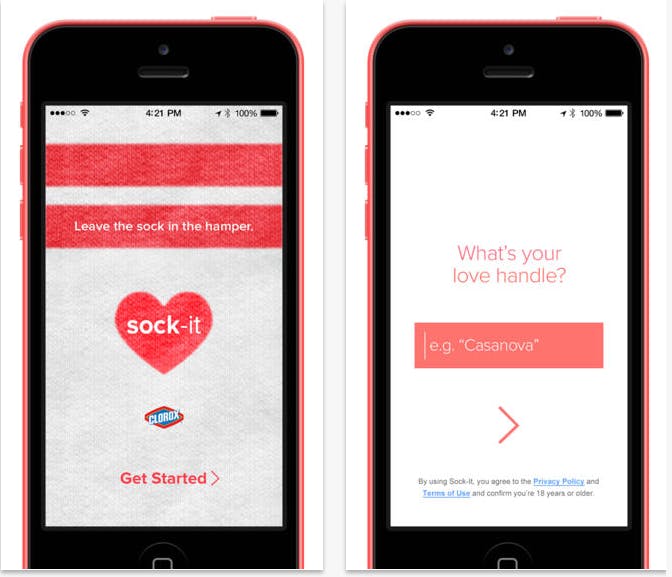 According to a Clorox representative, the company became interested in creating Sock-It when they found out they could use iBeacon. “The inspiration came through collaboration with one of our digital partners. We learned about the new iBeacon technology late last year and wanted to leverage it to engage a new, younger audience in a fun way that drew off our laundry legacy. From the time we learned about iBeacon to launch was about 3-4 months,” they told the Daily Dot.

Apparently, in those 3-4 months, the Sock-It team didn’t do their research, because there was already an iOS app for virtual sock-sending out there. Sock-It closely resembles Sendasock. Like Sock-It, Sendasock is an app designed to let college students warn their roommates not to barge in while they do sex stuff. It warns said roommate by allowing them to send a digital sock icon that indicates says sex stuff is happening. There aren’t any other titles that do this in the App Store, because it’s a weird and specific niche app.

BuzzFeed’s Katie Notopoulos pointed out the strange similarity between Sendasock and Sock-It. “It appears the conglomerate has cribbed Sendasock’s premise for its own,” she wrote. Clorox denied prior knowledge of the app.

“In regards to if we believe they knew about our app or not, it’s sketchy,” Bradley told the Daily Dot. “When Sendasock was released a year ago, it was mentioned by BuzzFeed, CollegeMagazine, CollegeHumor, Al Jazeera, and our school, Maryland Institute College of Art.” 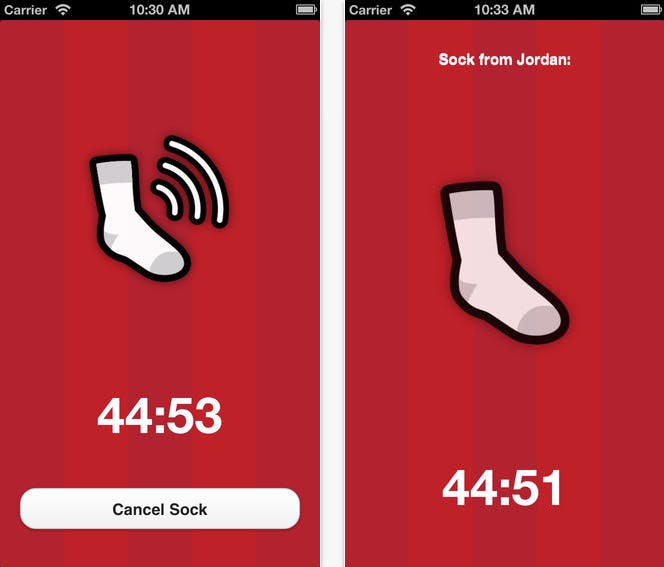 Bradley believes that finding out about an app with the same concept would’ve been inevitable as the Clorox team made Sock-It. “If you type even general search terms on Google, i.e.: ‘sock app privacy roommate’ or ‘roommate hookup privacy app,’ Sendasock will appear in an article on the first page,” Bradley told us. “This means that Clorox either saw the app and just told BuzzFeed that they didn’t, or they just didn’t do their homework.”

Now, the apps aren’t identical. Clorox’s is more polished, which makes sense, because it’s a massive multinational corporation and not two college students on a budget. The biggest difference in functionality is Sock-It’s use of iBeacon, since it automatically sends an alert to every phone in the area with the app, whereas Sendasock only sends digital socks to the roommates that the user has previously added.

The fact that iBeacon is the biggest distinguishing characteristic may explain why Clorox is now emphasizing that the location technology was its inspiration.

Clorox reiterated that it did not know about Sendasock to the Daily Dot. “Given our laundry heritage and benefit around keeping white socks white, we’ve long thought about doing something with the ‘sock on the doorknob.’ We’ve also done ad campaigns that specifically highlight the white sock as hero,” a spokesperson told us. “Sock-it was made possible by the new iBeacon technology as a way to leverage our heritage to do something fun around this age-old idea. We weren’t aware of the Sendasock app when developing Sock-it.”

So, to recap, the Clorox argument is: Since the company’s laundry products help clean socks, they thought about incorporating the “sock on the doorknob” trope into their ad campaign for some time. OK, I can buy that.

What’s harder to swallow? That Clorox found out about iBeacon technology and thought “we need to make an app for college students so they can tell people they’re having sex.”

There are so many other things Clorox could do with the iBeacon technology that would make much better apps. I am a writer, not an ad person, but just go ahead tell me these aren’t superior app ideas:

1) Laundry Alert: The most obvious way Clorox could create an app for college students using iBeacon would be to make one that lets people who lived in the same dorm know when people were entering and exiting the laundry room, since trying to find an empty machine can feel a little Nativity Story. I share laundry machines with the tenants in my building now and I would like this app.

2) Flappy Sock: It’s like Flappy Bird but with little socks. Tell me people wouldn’t like that! You could use iBeacon technology to let players in the vicinity compete against each other.

3) Sock-it-to-me: A mobile-only deals app called that shows customers potential savings and discounts on all Clorox products whenever they go grocery shopping. To gamify it, the app could use iBeacon to show how much people around you had already saved.

These are all better, more brand-relevent ideas than Sock-It and it took me less than 15 minutes to come up with them.

Even the guys who made Sendasock have moved on to another app concept because they recognized the limits of their app. Bradley and Crapo shifted focus to an app called Crowds for real-time party planning. They are releasing an update to Sendasock, but Clorox doesn’t need to worry about the young app makers bringing their rival products into even closer competition. “We won’t change the core functionality of Sendasock too much because we think it’s fundamentally better than Sock-It,” Bradley told us.

So whether Clorox’s utterly bizarre hookup-warning app was influenced by Sendasock remains a mystery. Clorox is sticking with the “inspired by iBeacon” story, and it could be true—or perhaps someone working with or at Clorox had seen Sendasock at some point and subconsciously echoed the idea.

Either way, that one of these apps exists is strange enough. It would be even weirder that a massive cleaning product company and two college buddies had the same idea for the same weird app than it would if one had ripped the idea off the other, but sometimes the truth is stranger than fiction, so we’ll just have to dwell in clean-socked ambiguity here.