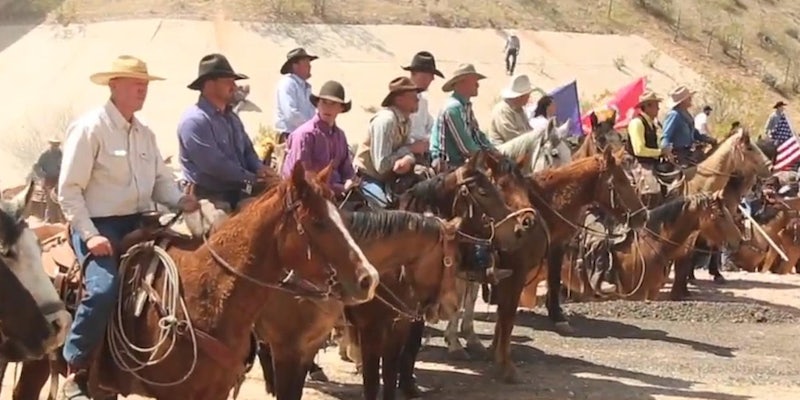 Hundreds of mounted cattle ranchers fight for their right to stomp all over protected land.

From Tahrir Square to Zuccotti Park, Twitter and Facebook have demonstrated a power to spur social change. While the Arab Spring may have seen some extraordinary demonstrations, it produced nothing quite as surreal as the events that unfolded in Nevada this week where, spurred by social media, a gun-toting militia converged on Federal Bureau of Land Management agents in a camera-friendly standoff.

The above video of the showdown comes courtesy of conspiracy shock jock Alex Jones and shows the BLM sensibly backing down and not giving the armed cowboys the bloodbath they desperately seemed to want. The militia were there to support cattle rancher Cliven Bundy, who has refused to pay over $1 million in fees to the BLM that he owes for grazing his cows on the habitat of an endangered tortoise species.

Of course, the armed confrontation wasn’t really about the tortoise. The descent of the militia on Nevada is the culmination of the ratcheting up of anti-federal government sentiment by pundits like Jones and the fevered conspiracy theories that have swirled around the Cliven Bundy case online.

The We Support Cliven Bundy Facebook page, which has over 40,000 likes, is brimming with a mixture of frothy hatred for the Federal government and swivel-eyed calls to fight tyranny. And if you think the BLM backing down means that the online saviours of tortoise bothering ranchers are going away, think again. A video called Fed Retreat was Psyop Next Wave Soon has had over 40,000 hits in the past 24 hours, and it will surely keep militia around the country on their toes.