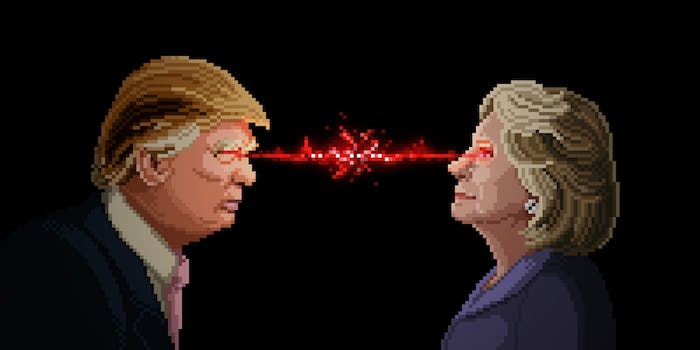 The surprising overlap between Clinton and Trump’s foreign policies

Both have agreed on some of the biggest national security questions of the 21st century.

The bell rang loud and clear on Thursday for an early round in the unfolding brawl that is the 2016 election.

Hillary Clinton approached the podium for her landmark foreign policy speech in San Diego, California, on Thursday, while Donald Trump sat behind his keyboard ready to tweet. The subject was national security, and everyone was ready for a slobberknocker.

“This is not someone who should get the nuclear codes,” Clinton said. “It’s not hard to image Donald Trump leading us into a war just because someone got under his very thin skin.”

As the two candidates traded blows on television and the Internet, one key fact went largely unsaid: Both have agreed on some of the biggest national security questions of the 21st century.

“It’s not hard to image Donald Trump leading us into a war just because someone got under his very thin skin.”

Both Clinton and Trump wanted to go to war in Iraq. Clinton eventually apologized for her vote in support of the Iraq War while Trump denies he wanted the war at all. But the recording speaks for itself.

Clinton, who definitively does not apologize for this intervention, is said to have played a decisive role in convincing President Barack Obama to militarily intervene in Libya. Trump, who vocally pushed for Libyan intervention, now criticizes the move. And because Libya has Clinton’s fingerprints on it, he points to it as a particularly woeful disaster by trotting out falsehoods and lies about the country’s current situation.

Clinton and Trump both advocated a wider military involvement in Syria and throughout the war against the Islamic State. Clinton has advocated for no-fly zones in the country while urging American troops in Iraq to return to frontline fighting. Trump has gone much further. In March 2016, Trump said we should put 30,000 troops on the ground in Syria. That statement pales in comparison to Trump saying he wouldn’t rule out using nuclear weapons in the war.

There’s no doubt that the foreign policies of a Clinton and Trump presidency would have some stark contrasts.

Trump is much more friendly to openly torturing terrorists and killing their family members. Trump would consider leaving the North Atlantic Treaty Organization (NATO), pulling out of other long-held alliances, and allowing the global proliferation of nuclear weapons. He praises the strength of dictators like the Chinese Communist Party, a sign of the kind of strength he might want to emulate. Clinton opposes him on all of these fronts.

Trump, in promoting his 2016 candidacy, said, “We would have been better off if we never looked at the Middle East for the last 15 years.”

But actually, in the last 15 years, neither Clinton nor Trump looked away from Middle East and, when it mattered, they sometimes saw eye-to-eye.