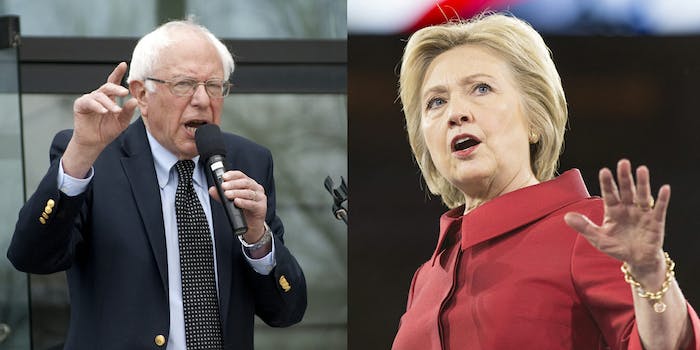 She also praised him on some aspects of his campaign.

Hillary Clinton slammed her former presidential primary rival Sen. Bernie Sanders (I-Vt.) for “impugning” her character and chastised his most ardent supporters—so called “Bernie Bros”—for getting “ugly” and “sexist” during the campaign.

The remarks about the primary come from Clinton’s new book What Happened, which will be released next week. Ultimately, Clinton argues that Sanders’ attacks helped President Donald Trump eventually gain momentum and be elected.

“[Sanders’] attacks caused lasting damage, making it harder to unify progressives in the general election and paving the way for Trump’s ‘Crooked Hillary’ campaign,” Clinton wrote. “I don’t know if that bothered Bernie or not. He certainly shared my horror at the thought of Donald Trump becoming president, and I appreciate that he campaigned for me in the general election.”

Clinton continued to throw shade at Sanders, who she bested by nearly 4 million more votes in the 2016 presidential primaries. The former Secretary of State said Sanders “isn’t a Democrat”—which is true, the senator is an independent, but caucuses with the Democrats in Congress—and that he only got into the presidential campaign to “disrupt the Democratic Party.”

Wow – "I am proud to be a Democrat and wish Bernie were, too." #ShePersisted pic.twitter.com/jSv7ilP5Nv

However, Clinton also praised the Vermont senator for helping steer the conversation in the Democratic party toward working families, problems with campaign finance, and engaging young voters in the political process.

But Clinton disagreed with his view of the Democratic Party, and his desire to disrupt it.

“I think he was fundamentally wrong about the Democratic Party—the party that brought us Social Security under Roosevelt; Medicare and Medicaid under Johnson; peace between Israel and Egypt under Carter; broad-based prosperity and a balanced budget under Clinton; and rescued the auto industry, passed health care reform, and imposed tough new rules on Wall Street under Obama,” Clinton wrote. “I am proud to be a Democrat and I wish Bernie were, too.”