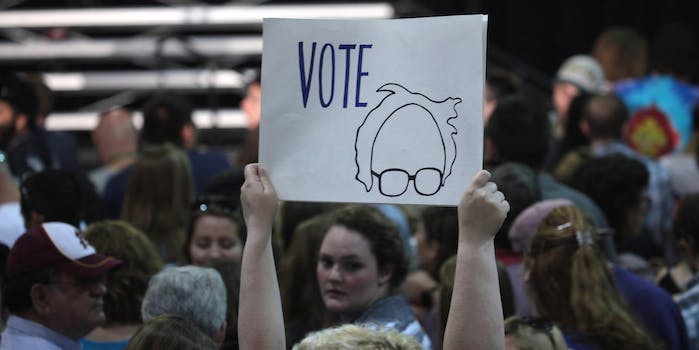 Anarchy in the Silver State.

Chaos reigned at the Nevada Democratic convention on Saturday, sparking an infectious divide between supporters of Hillary Clinton and Sen. Bernie Sanders and, some believe, threatening the very foundations of democracy.

The mess, which was livestreamed in its entirety, began almost as soon as the convention started on Saturday morning and continued for 16 hours, as a rules change, a small fight, a medical emergency, and lots of yelling culminated with Sanders coming out further behind in delegates than his supporters believe is justified.

Much of the mayhem can be attributed to Nevada’s complicated delegate-allocation process. But the real controversy lies in the dark abscesses of the Democratic presidential race, where a question has been percolating for months: Is the system rigged against Sanders?

Without getting too much into the weeds, here’s a brief explanation of what went down in Nevada—and who’s to blame.

Yes, by roughly five points. But only 23 of the state’s 35 delegates are awarded proportionally based on the caucus results, with Clinton receiving 13 and Sanders gaining 10. (Nevada also has five so-called superdelegates, party officials who can vote either way at the Democratic National Convention in July.) Another seven were doled out during the convention, and that’s where the trouble started.

How are those seven delegates awarded?

In April, representatives were elected to attend the Nevada Democratic convention, where they would pick the remaining at-large delegates. Sanders reportedly out-organized Clinton, with an expected 2,124 Sanders supporters to Clinton’s 1,722.

Had things gone according to the Sanders camp’s plan, the Vermont senator would have received four of the seven delegates, while Clinton would have received the remaining three. At the end of the day, however, Clinton supporters outnumbered Sanders supporters by a thin margin, resulting in Clinton receiving a total of 20 delegates to Sanders’s 15.

That all seems pretty straightforward. Why are Sanders supporters upset?

First, Sanders supporters were angry that the party adopted a set of temporary rules as the convention’s permanent rules because they thought the rules favored Clinton. Sanders supporters had launched a petition ahead of the convention to reject those rules, which included the ways in which voice votes were verified, but they weren’t able to present their petition before the rules were adopted by a voice vote, according to the Las Vegas Sun.

Sanders supporters also opposed Roberta Lange, chairwoman of the Nevada Democratic Party, leading the convention. As it turns out, Lange adopted the aforementioned rules based on a voice vote, which many say was not based on reality, given this video video evidence. However, that video may not be accurate, especially given the convention’s clearly chaotic environment.

After the adoption of the rules, the Sun reported, Sanders supporters started chanting “this is fixed,” and Clinton supporters responded by saying someone should call the police.

Also, preliminary vote count found that Clinton had a slight lead over Sanders. But Sanders supporters said many people weren’t counted in that vote, and they asked for a recount.

Calif Sen Barbara Boxer: If you boo me you're booing Bernie Sanders pic.twitter.com/mAAu6YNugZ

Wow, that sounds ridiculous. Is that it?

Nope, not even close. But the most important moments came hours later, when the final vote tally came in, giving Clinton 1,695 convention supporters and 1,662 for Sanders. The problem is that 56 Sanders supporters were denied entry to the convention because, according to the party, they had not registered as Democrats by the May 1 deadline. Eight Clinton supporters were also denied for the same reason. Still, those 56 people would have pushed the vote in Sanders’s favor.

Yes. The convention ran 16 hours—far longer than it was supposed to—so police were called in at the end of the night to make sure things didn’t get escalate further and to make everyone leave the casino where the convention took place. They also turned off the lights and turned the music up, and people allegedly freaked out, including some Sanders supporters.

Is this part of a bigger problem in the Democratic Party?

A whole lot of Sanders supporters would argue it is. Many believe the Democratic Party favors Clinton over Sanders, having set the debates on weekend nights to deny Sanders visibility and reportedly allowing Clinton to bend certain rules.

“What happened in Nevada is likely to happen elsewhere,” wrote Sean Illing for Salon. “The perception that the DNC has thrown its institutional support behind Clinton has only deepened the internal divide within the party. The Sanders wing is pissed off, and rightfully so.”

Do the Nevada results change the course of the Democratic race?

At this stage, they do not. Clinton now has a lead of 283 pledged delegates over Sanders—more than double the largest lead Barack Obama, then a senator, held over Clinton in 2008. If Sanders manages to pull out an unprecedented string of major victories over Clinton in the remaining state contests, and the race comes down to two pledged delegates, then we might look back on this insanity and wag our fingers.

For now, however, the upheaval of the Nevada Democratic convention is more about the potential for party unity in the general election against presumptive Republican nominee Donald Trump, trust in the Democratic Party as a whole, and the democratic principle that says every voice matters—even if they’re yelling and throwing chairs.