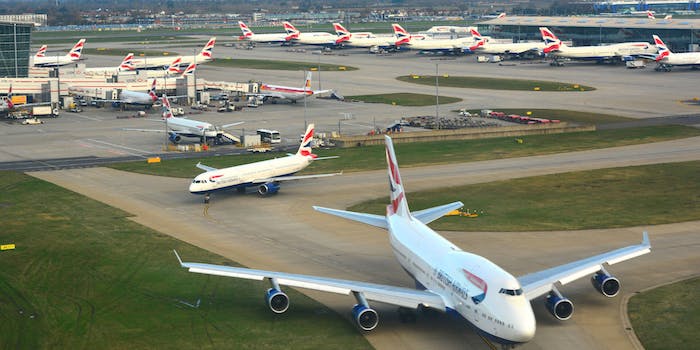 The protest follows the government's decision to approve a third runway, despite declaring a climate emergency.

Climate activists in the U.K. are planning on using toy drones in September to shut down Heathrow Airport, one of the busiest airports in the world.

The group, which refers to itself as Heathrow Pause, is hoping to halt all flights beginning Sept. 13 in response to the government’s recent approval of a third runway at the airport.

In a statement on its website, the activists say they intend to use “toy drones in protest at the continuation of massive carbon intensive projects.”

The group says the plan follows the U.K. government’s recent climate emergency declaration, in which it vowed to reduce carbon emissions to net-zero by 2050. Heathrow Pause says a third runway at the airport all but ensures that goal won’t be met.

The activists have described the protest as an “inherently safe and nonviolent action” due to the use of small drones that will be flying only 6 feet above the ground. The group adds that the drones will only be flown early in the morning, roughly a mile away from the actual airport and out of any flight paths–but still within the no-fly zone.

A spokesperson for Heathrow Airport told TechCrunch, however, that it has no plans to ground any flights in response to the protest.

The airport received major criticism in 2018 after countless flights were canceled on several occasions in response to drones being flown in the area.

Heathrow Pause says it will meet with police and airport authorities on Friday, but it will only call off the protest if the third runway project is canceled.