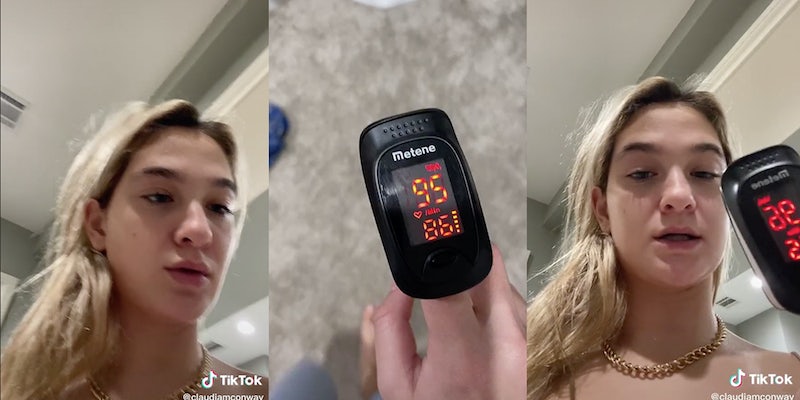 Claudia Conway says it ‘hurts to breathe,’ mom Kellyanne refuses to take her to hospital

The 15-year-old, who recently tested positive for COVID-19, is asking TikTokers for advice.

After becoming an unexpected whistleblower via TikTok when her mother tested positive for COVID-19 and infected the entire family, the daughter of ex-White House Counselor Kellyanne Conway, Claudia Conway, shared several videos on TikTok, saying that it “hurts to breathe”. She says that despite having COVID-19 and exhibiting low oxygen readings, her mother claims she “doesn’t need to go to the hospital.”

The 15-year-old and her mother have previously gone back and forth about the things she shares online. She posted a video saying she was “suspicious” of her mom who was coughing around her after being in close contact with President Donald Trump, who also tested positive for COVID. She, at first, alleged her mother lied to her about testing negative and shared another clip of her mom yelling and cursing at her, according to Business Insider.

In a post revealing a pulse oxygen measurement, her blood oxygen read at 91. According to Healthline, a normal reading for someone with healthy lungs on a similar device is reported to land anywhere between 95 to 100.

“It won’t stop beeping my oxygen is low haha!” she wrote in the video’s caption. “Do I go to the hospital now?” she can be heard saying as the monitor beeps continuously.

Various followers urged Conway to head to the hospital since her levels appeared alarmingly low for someone of her age.

A recent Loyola Medicine study states that Hypoxemia, or low blood oxygen levels, is a common symptom in COVID-19 patients that “bewilders physicians” and “defies basic biology” since many victims of the virus will not notice changes or trouble in breathing despite having low oxygen.

In a later follow-up post, Conway’s oxygen levels seemed to have rebounded a bit, reading within the more normal range at 96. However, Conway notes having difficulty breathing while also noting the device was fluctuating.

“Can someone please tell me what to do. It hurts to breathe and it keeps dropping randomly,” she wrote in the caption. “It keeps fluctuating, 95, 96, and I can’t breathe that well, it kind of hurts. So I don’t know if that’s good or bad, I’m not a doctor,” she said.

Both videos have now been viewed over 1 million times on the platform. Several medical professionals offered Conway advice in the comments, saying she should closely monitor her levels until they reach below 90, and that’s when she should definitely go see a doctor.

In a follow-up comment, Conway wrote, “Mom said I don’t need to go to the hospital so looks like I’m dying! peace.”