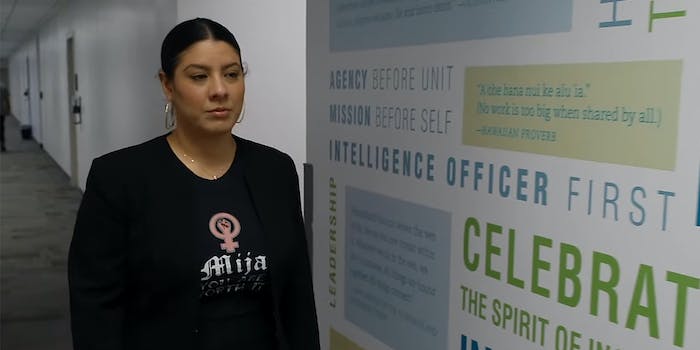 The CIA is ‘woke’ now, apparently

'The CIA went from waterboarding terrorists to torturing Americans with shitty woke commercials.'

The Central Intelligence Agency is known for many things: coups, torture, drug trafficking, blockbuster films whose main character is equally sexy and deadly. The CIA is not, however, known for diversity or wokeness.

In an apparent attempt to change that perception, the agency released a recruitment ad featuring a first-generation Latina millennial mother who has generalized anxiety disorder and supposedly works for the CIA.

Almost everyone absolutely hates it.

The agency that brought cheap cocaine to South Central Los Angeles is being accused of appropriating language and symbols that oppose the very oppression it foments.

“Look at the language used, and the t-shirt she’s wearing: a literal raised fist,” tweeted YouTuber Zei Squirrel. “You can’t make this shit up.

“They are coopting what was supposed to be an emancipatory language to enact mass murder and torture.”

Others picked up on the same vibe.

Many felt that the woman in the ad, which is part of an entire series of ads about “Humans at CIA” (yes, really), isn’t exactly doing her ancestors proud.

“What I hear from this vid: ‘I got hired because I’m good optics and willing to sell out any morals for the CIA,'” commented @RomSparrowhawk.

Some used the occasion to point out the CIA’s alleged involvement in Latin and South American coup attempts and extrajudicial killings of civilians.

The mockery was practically universal.

“Is this a deleted scene from Paul Verhoeven’s Starship Troopers?” mused @underdog_toby.

As with all things internet, eventually there was a backlash to the backlash.

Several opined that the CIA actually needs a more diverse workforce to accomplish its mission. “Clearly, they think they have appeal to woke millennials – and they’re probably right,” Matt Taibbi said.

“If you’re mad that the CIA values diversity, your claim to love the most diverse democracy in human history rings hollow,” tweeted fellow author Jason Kander.

CIA jobs start at roughly $60,000 in annual salary plus benefits. Killing heads of state is one of the many additional perks of the job.