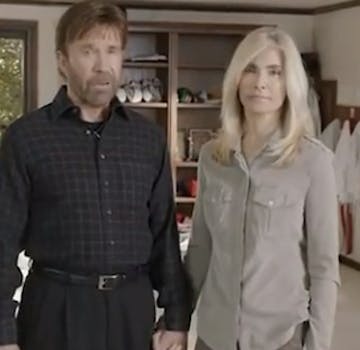 He joins Clint Eastwood in the ranks of heavyweight actors backing Mitt Romney and the Republicans.

Chuck Norris does not mince his words. He pulverizes them with a roundhouse kick.

The actor and martial artist made a rallying call for Evangelical Christians in the U.S. to make their way to the polls in November to defeat Barack Obama. The tone of his video was bizarre, opening with talk of a “growing concern we all share” before describing some dire consequences should Obama be reelected.

Alongside his wife, Gena, Norris suggested that the “country as we know it may be lost forever if we don’t change the course in which our country is headed.” However, he doesn’t really make it clear what will be lost (other than mentioning freedom being under attack), nor where the country is headed.

Gena quotes Ronald Reagan and suggests that the U.S. is headed for “1,000 years of darkness” after a second Obama term. That’s a little over 20 years of gloom for every month of a four-year term, which seems a little excessive.

Norris is not the first heavyweight actor lining up for the Republican and Mitt Romney cause, and he’s the second in the space of a week to make some peculiar statements after Clint Eastwood’s interview with an empty chair.