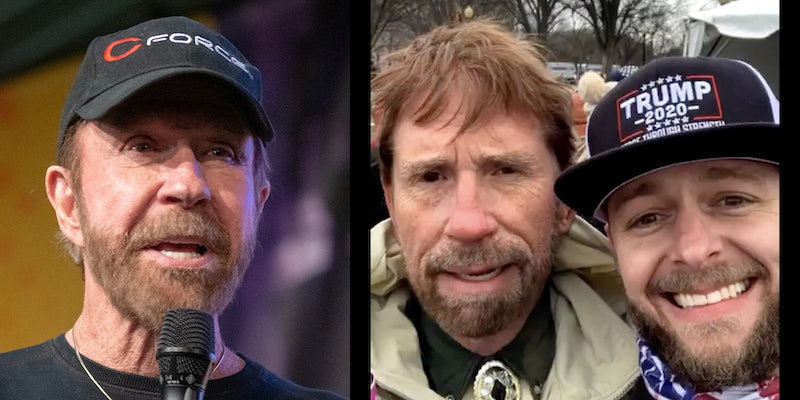 No, Chuck Norris did not storm the Capitol (updated)

Was it Chuck Norris or just an incredible doppelgänger?

Update 2:00pm CT, Jan. 12: A representative for Chuck Norris tells the Daily Dot that he was not in Washington, D.C. attending the Capitol riots. In fact, they say, he remains at his ranch in Texas.

As the FBI continues to identify participants in last week’s Capitol riot, Twitter users are doing some sleuthing of their own. Many users on Tuesday were furious to discover that Chuck Norris had attended the insurrection—while others were convinced it was just a celebrity doppelgänger.

On Monday night, Twitter user @NunesDrag shared a screenshot of an Instagram post by Matthew Bledsoe. In the photo, Bledsoe is wearing a Trump 2020 hat and posing for a selfie with an older man. The photo is captioned “Chuck norris.”

“Wait, so are we just not going to mention the fact that Chuck Norris was at the MAGA insurrection?” @NunesDrag asked. (They also linked to a Scoop Memphis article from November that said Bledsoe, 36, was charged with domestic assault after picking his wife up by the throat and slamming her to the floor of their house.)

@NunesDrag’s tweet has received more than 25,000 likes and 12,000 retweets at the time of this writing. Many users were disappointed but not surprised, dredging up old headlines that showed Norris warning of “1,000 years of darkness” if President Barack Obama won reelection in 2012 and backing homophobic justice Roy Moore during his 2017 Senate bid.

Norris also announced his support for President Donald Trump and warned of the “monumental consequences of another Clinton presidency” in a 2016 op-ed.

While Norris’ appearance at the Capitol riot would be consistent with his political views, many Twitter users still doubted it was him in the viral photo.

As many users noted, Norris appears to have green eyes in most photos on the internet, while the man in Bledsoe’s selfie had brown eyes.

One Twitter user plugged the selfie into a facial recognition software and got an 85% match to Norris, which basically meant “yeah it kind of looks like him, but not really.”

Norris’ social media has been quiet over the past week save for promotional Twitter and Instagram posts.

User @AliceGlencross shared a photo of Norris from last September, when he turned 80, looking much more vibrant than the haggard man in Bledsoe’s selfie. “Trumpers are just that gullible,” she wrote.

As of early Tuesday afternoon, Twitter users still can’t reach a verdict on whether Norris was at the Capitol riot. The Daily Dot has reached out to his representative.

If only Norris had been dressed in Shamanic clothing, it would be much easier to know whether to cancel him.