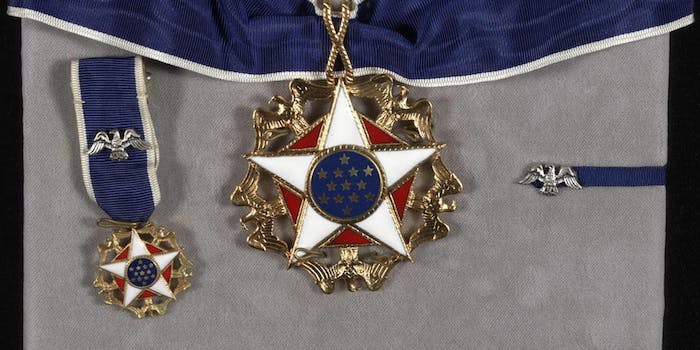 Thousands of people are signing an online petition urging the Obama administration to award the Presidential Medal of Freedom to Chris Mintz, the military veteran who was shot while attempting to subdue an active shooter at Umpqua Community College in Oregon earlier this week.

“Mr. Mintz… continues to display the values of the United States military by his actions to alert others of the danger and then to endanger himself while delaying the attacker to allow time for others to escape,” the petition reads. “Mr. Mintz positively displayed the values of loyalty, duty, respect, honor, integrity, personal courage, and self-sacrifice to attempt to save as many of his fellow citizens as possible.”

On Thursday, Chris Harper-Mercer opened fire on the school’s campus in Roseburg, Oregon. Harper-Mercer killed nine people before fatally turning the gun on himself.

In the midst of the attack, Mintz charged Harper-Mercer in an attempt to block him from entering a classroom full of people. Mintz was shot seven times. Prior to rushing the shooter, Mintz had already led a group of people to leave the building where it was occurring. He then re-entered to help prevent more casualties. In the days since the tragedy, Mintz’s actions have been widely hailed for this selfless heroism.

Mintz’s injuries weren’t fatal, but they were serious. Mintz’s cousin launched an online crowdfunding campaign to cover his medical bills. The campaign initially set a $10,000 goal. In the two days since it was launched, the effort has brought in over $700,000.

Bestowed by the President, the Presidential Medal of Freedom is the highest honor the government can grant a civilian. It’s been given out since the early 1960s, and previous recipients have included Mother Teresa, Norman Rockwell, Stevie Wonder, Warren Buffett, Martin Luther King Jr., and Jonas Salk.