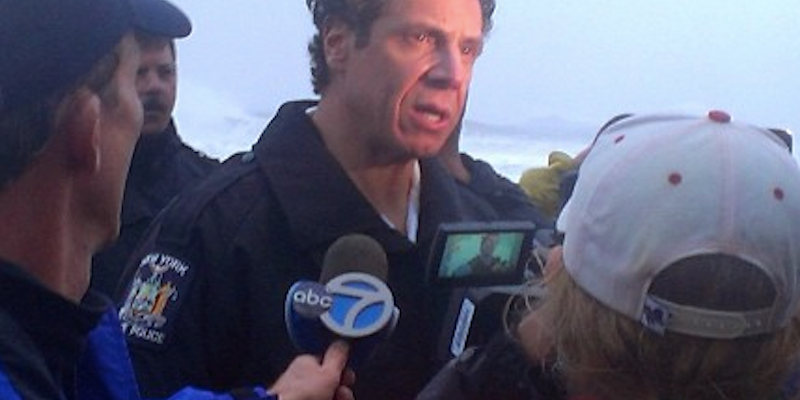 Govs. Chris Christie and Andrew Cuomo were two of the most prolific on the microblogging site Monday.

As Hurricane Sandy slammed the Northeast, another storm was brewing on Twitter. Political leaders across the affected regions were flooding the social media site with emergency messages and observations from the storm, in a prime example of how government leaders are using social media to bypass traditional media filters.

Two of the biggest Twitter users were New York Gov. Andrew Cuomo and New Jersey Gov. Chris Christie. Both men were giving a play-by-play of what they were seeing on the ground throughout Monday and into the night.

Cuomo was on the ground in New York City, as floodwaters inundated streets and subways. The governor was sending out dramatic images of the action, including a flooded Battery Tunnel. At times Monday night, it seemed if Twitter and YouTube were some of the only reliable news sources out there, as CNN and the Weather Channel both mistakenly reported that the New York Stock Exchange was flooded.

But there was no denying the images Cuomo was sending out. Over the course of Monday, Cuomo tweeted or retweeted nearly 300 items. He wrapped up the day with a note of hope.

“Our thoughts are with all NYers affected by the storm and thank you to all our 1st responders for their hard work tonight,” he wrote shortly before midnight.

Meanwhile in New Jersey, Christie was also taking to Twitter to inform residents about what to do and how to stay safe – in his own way.

“This is going to be a long haul. This is not a time to be stupid. This is a time to save yourself and your family,” Christie wrote on Monday.

Whereas Cuomo seemed to focus on tweeting tips to survive the storm, a lot of what Christie tweeted about was a rolling diary of the day: everything from President Obama calling to his disappointment in those who did not evacuate were covered.

Local officials were also taking to social media, including Twitter favorite Cory Booker, the mayor of Newark, N.J. The Democratic mayor was out in the storm and responding to citizens who tweeted problems at the mayor. One person reported that transformers in his neighborhood were exploding, and Booker quickly responded.

“I will report. And I’m in the area, I’ll come by RT @mrkonitall: major transformers blowing up in North Ward by Park Ave and on Orange St,” the mayor wrote.

Although the storm is far from over, the work by Cuomo, Christie, and Booker on the ground and online was to be commended. With such a huge event taking place, the traditional media certainly doesn’t have the power to be everywhere and report everything. But with Twitter, these and other government officials have been able to reach out to their constituents.