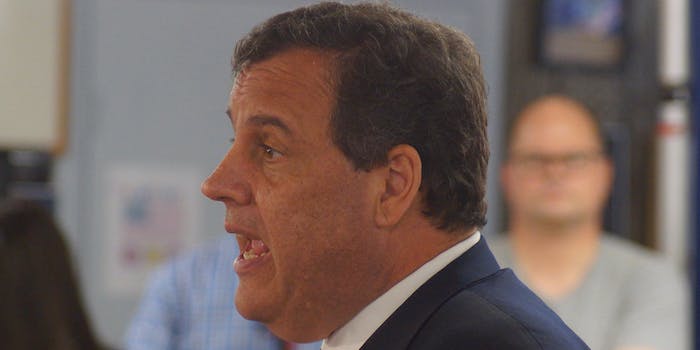 An addict’s life, Christie remarked, 'is just as much a precious gift from God as the one in the womb.'

There have been few moments when Gov. Chris Christie has managed to stand out from the crowded field of 2016 Republican presidential candidates. His remarks last week about drug addiction at a campaign stop in Belmont, New Hampshire, are chief among them.

Speaking to a small crowd at Shooter’s Tavern, the New Jersey governor recounted his mother’s lifetime of cigarette addiction and the lung cancer treatment that followed at age 71—an emotional exemplum he then contrasted with a “16-year-old teenage girl on the floor of the county lockup addicted to heroin.”

He added: “Yet, somehow, if it’s heroin, or cocaine, or alcohol, we say, ‘They decided it. They’re getting what they deserve.’”

Christie continued by saying that being “pro-life” is more than being against abortion. An addict’s life, he said, “is just as much a precious gift from God as the one in the womb, and we need to start thinking that way as a party and as a people and the president needs to say those things.”

A video of Christie’s remarks, posted on Facebook by the Huffington Post on Oct. 30, currently has more than 4.1 million views. In a top comment, Facebook founder Mark Zuckerberg replied: “This is an important message. Extremely well said, and thank you for focusing on this.”